Every Village Has Electricity, Says Government. A Reality Check

Though the village electrification target is nearly met, PM Modi's government knows more is needed. Last year, it followed up with a $2.5 billion program to provide power connections to nearly every household by the end of March 2019. 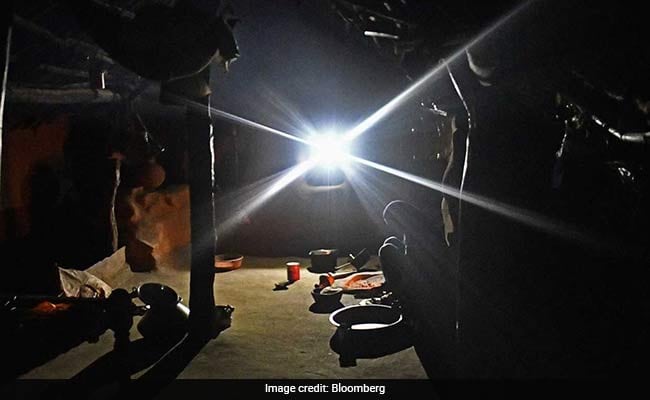 PM Modi's BJP won a majority in state elections on the back of promises to improve living standards.

Prime Minister Narendra Modi stormed to victory in 2014 on pledges to improve the lives of Indians, including bringing power to every citizen.

Rural electrification became a cornerstone of the prime minister's plan, which included connecting more than 18,000 villages by the end of this month. And with only a few left to be electrified, according to government data, that's a target PM Modi's administration looks set to meet.

But that will still keep almost 32 million homes in the dark: the government deems a village "electrified" if 10 percent of its households, as well as public places such as schools and health centers, are connected. As of Thursday, less than 8 percent of the newly electrified villages had all homes electrified, the data showed, leaving swaths of rural India without power, which can hinder economic growth, basic health care and education.

"Such vague definitions only create a false sense of achievement and take us further away from the ground reality of duration and quality of supply in these areas," said Vivek Sharma, a director at CRISIL Infrastructure Advisory, based in Gurugram. "It's not simple connectivity that triggers economic activity. It is continuous and good quality power supply that does it."

Though the village electrification target is nearly met, PM Modi's government knows more is needed. Last year, it followed up with a $2.5 billion program to provide power connections to nearly every household by the end of March 2019, just weeks before PM Modi's term expires.

Government data this week showed India had electrified about 13 percent of the almost 36.8 million homes identified in October as needing power. To meet its next deadline, it has to accelerate its monthly pace by more than threefold, according to Bloomberg calculations using government data.

"I'm skeptical that the government would be able to electrify all the households by 2019. It's going to take many more years after that," said Johannes Urpelainen, a professor of energy and resources at Johns Hopkins School of Advanced International Studies in Washington, D.C. "People are worried about the documentation process and large power bills. Even when you offer them free connections, many people are unwilling to take it."

To be sure, India has made significant strides in electrification since 2000. Electricity reached 82 percent of the population in 2016, up from 43 percent at the turn of century, according to the International Energy Agency. Still, of the one-quarter of the world's population without electricity that year, about 239 million people were in India, it said. 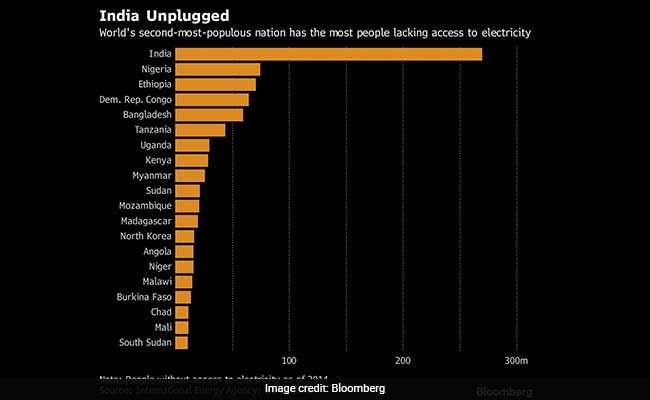 The remaining homes without electricity are spread across 24 provinces of the country.

Connecting all homes will require 28 gigawatts of generation capacity, the power ministry estimated in January. That will benefit the nation's generation plants that are unable to find buyers for all the electricity they can produce. Under-utilized capacity, fuel shortages and overdue payments from distribution companies have put nearly 75 gigawatts of power projects under financial stress, according to industry lobby group Association of Power Producers.

"Government of India is committed for not only village electrification but also household electrification," Rural Electrification Corp. Ltd., a state-run company under the power ministry, said in response to questions. "Access alone does not serve purpose. It has to be backed by adequate, reliable and quality supply" from the individual states, which the central government is supporting through various policies, it said.

Indeed, the real test will be whether the government can ensure reliable supplies to the people, rather than simply taking power cables into people's homes, according to Brian Min, author of the book "Power and the Vote: Elections and Electricity in the Developing World."

"With rising incomes and growth, voters have greater expectations," said Min, who teaches political science at the University of Michigan. "They want more than just power poles and transformers. They want reliable energy they can use when and where they need it."

The remaining homes without electricity are spread across 24 provinces of the country, with the highest concentration in states that have an outsized impact on general elections. Uttar Pradesh, the giant north Indian state that has the biggest representation in parliament, accounts for 42 percent of the nation's households without electricity access, according to government data.

The state, which is home to PM Modi's political constituency, Varanasi, was a key contributor to his 2014 victory and has since been a gauge of the success of his policies. PM Modi's Bharatiya Janata Party won a majority in state elections last year on the back of promises to improve living standards, including providing better local sanitation and greater access to electricity and clean cooking fuel.

Electricity supply is controlled and maintained by India's state governments, which have used cheap power to rural homes and farmers as a political tool, often at a financial loss. State distribution companies were saddled with accumulated debts of almost 4.1 trillion rupees ($61.7 billion) as of March 2015, according to the power ministry's latest annual report. PM Modi's government has also devised a program to help them work down their debts with help from the states.

The distributors, known as discoms, have traditionally coped with losses by limiting power supplies to heavily-subsidized consumers in rural areas and selling more expensive electricity to industrial consumers.

Lack of political interference would allow discoms to improve billing and revenue collections, revise tariffs to reflect costs and crack down on electricity theft, according to Abhishek Jain, an analyst at New Delhi-based Council on Energy, Environment and Water.

Promoted
Listen to the latest songs, only on JioSaavn.com
"We have seen extremely strong progress in the past two years in electrification," said Hannah Daly, an analyst at International Energy Agency. "In the broader context, any electrification plan, especially for poor people, needs to be sustainable and needs to be affordable" for both households and governments.

"If it is not affordable for all," she said, "then it won't be sustainable."