"Leisang village in Manipur, like the thousands of other villages across India has been powered and empowered! This news will make every Indian proud and delighted," PM Modi said. 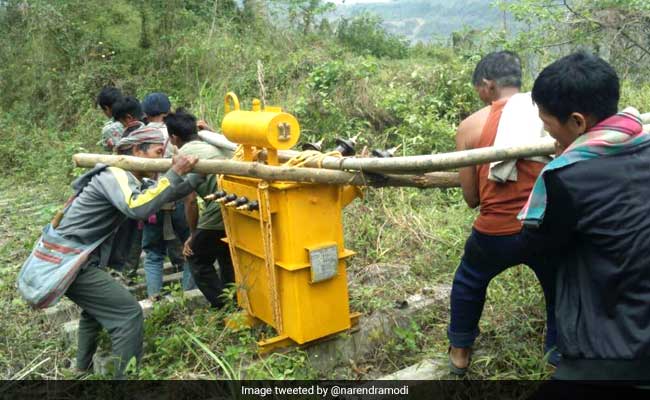 Leisang village in Manipur's Senapati district was named as the last one to get electricity.

New Delhi: The mammoth task of taking electricity to every village of India has finally been achieved, the government said today. In a series of tweets, Prime Minister Narendra Modi made the announcement, naming Leisang, a village in central Manipur's Senapati district, as the last one to receive electricity on Saturday.

A village is considered electrified if it has basic electrical infrastructure and 10 per cent of its households and public places -- including schools, panchayat office and health centre -- have electricity.

28th April 2018 will be remembered as a historic day in the development journey of India. Yesterday, we fulfilled a commitment due to which the lives of several Indians will be transformed forever! I am delighted that every single village of India now has access to electricity.

"Leisang village in Manipur, like the thousands of other villages across India has been powered and empowered! This news will make every Indian proud and delighted," he added.

In his Independence Day speech of 2015, PM Modi promised that all villages where electricity was yet to reach, will have power within 1,000 days. To create basic power infrastructure and connectivity, the government had announced a scheme named after right-wing ideologue Deen Dayal Upadhyaya - the Deendayal Upadhyay Gram Jyoti Yojana.

Taking electricity to every house remains another task. Even in villages that have electricity for long, many houses may not have power. The reasons are many - very poor families may not have the funds for connection charges or BPL cards that would make it free; lack of awareness of procedures and other issues.