Enforcement Directorate has registered a fresh case accusing former Railways Minister Lalu Prasad Yadav and his family including Tejashwi Yadav of laundering money. The case was registered after Nitish Kumar was sworn in as Chief Minister in alliance with the BJP-led National Democratic Alliance. 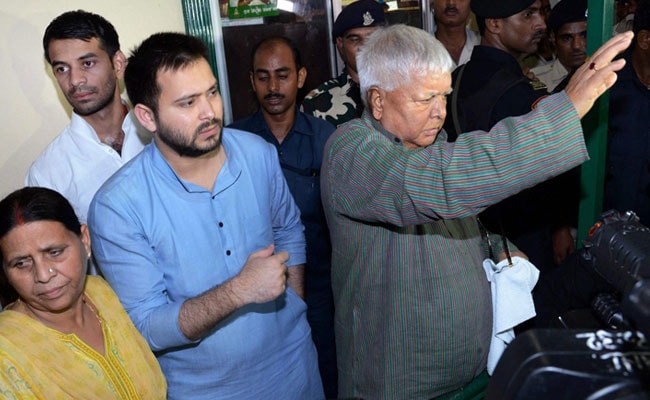 NEW DELHI: The Lalu Yadav family could be in more trouble. The Enforcement Directorate on Thursday also stepped in to probe money laundering by the former railways minister and his family in a railway hotel allotment case being investigated by the Central Bureau of Investigation.

The CBI had last month raided the family's assets in Patna and beyond in a case that also named Lalu Yadav's son Tejashwi Yadav as a suspect. Bihar Chief Minister Nitish Kumar, then an ally of Lalu Yadav's Rashtriya Janata Dal, had used this case to demand that the junior Yadav quit as Deputy Chief Minister. When he did not, Nitish Kumar last evening dumped the party led by Lalu Yadav.

Earlier this morning, Mr Kumar, who had resigned yesterday, was sworn in as the Chief Minister, this time in alliance with the BJP. It is being described as a masterstroke by Nitish Kumar and the BJP, leaving the Yadav household - that had two ministers in the state cabinet till yesterday - out in the cold.

The new case has been registered under sections of the Prevention of Money Laundering Act by the Enforcement Directorate on the basis of the initial CBI probe.

The money laundering case, however, could begin to pinch the Yadav family sooner than later. Under the stringent law, the Enforcement Directorate has the powers to attach and confiscate tainted assets. It is widely expected that the agency will invoke this power.

Lalu Yadav's daughter and Rajya Sabha member Misa Bharti is already facing a probe by the central agency into another Rs. 8,000-crore money laundering case. Ms Bharti and her husband Shailesh Kumar face the prospect of losing a farmhouse in South Delhi's Bijwasan area if they cannot demonstrate that the farmhouse was acquired using money from legitimate sources. Both of them have been told to produce the documents by tomorrow.

The family also faces another probe by the Income Tax authorities into allegations of corrupt land deals worth Rs. 1,000 crores in addition to tax evasion.

According to the fresh case by the Enforcement Directorate, Mr Yadav - as the country's Railways Minister back in 2006 - has been accused of facilitating a contract to a private company to run hotels, after receiving a bribe in the form of a three-acre plot in Patna, where a mall is being built.

The CBI alleges a conspiracy between Mr Yadav, Sujata Hotels and a company owned by Sarla Gupta, the wife of Mr Yadav's party MP and close aide Prem Gupta.

Promoted
Listen to the latest songs, only on JioSaavn.com
Sujata Hotels director Vinay Kochhar sold the premium commercial land in 2005 to Sarla Gupta's company and years later, the land was transferred to Mr Yadav's wife and sons.

The transfer of the land came through the same day the Railways started leasing hotels to private companies for maintenance. Railways received 15 bids for two hotels in Puri and Ranchi, but there are no records of bidders other than Sujata hotels, which snagged a 15-year lease.