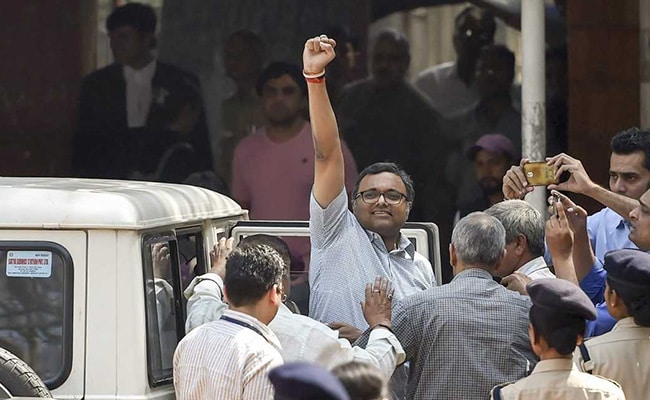 New Delhi: The Delhi High Court's order granting interim protection to Karti Chidambaram, has been challenged in the Supreme Court by the Enforcement Directorate. Advocate Rajat Nair, appearing for the ED appealed to the Supreme Court for an urgent hearing.

A bench comprising Chief Justice Dipak Misra and Justices A M Khanwilkar and DY Chandrachud, on Tuesday, considered the ED's submission and said it would be heard on Thursday.

On March 9, the Delhi High Court gave Karti Chidambaram a breather in a money laundering case and restrained the ED from arresting him till March 20.

A CBI court on Monday sent Karti Chidambaram to judicial custody till March 24. The court also refused his plea for urgent hearing on his bail application which was already listed for March 15.

As per the High Court order, Karti Chidambaram cannot be arrested by the ED, if the CBI court grants him bail on March 15.

Karti has approached the High Court to strike down the powers of arrest of the ED, under Section 19 of the Prevention of Money Laundering Act, as unconstitutional and in violation of rights of people for equality and protection of personal liberty.

The plea sought overruling of the enforcement case information report (ECIR) and probe by the ED for the offences under the money laundering act.

It sought overruling of the probe by the ED, alleging that it was contrary to the procedure established by law and violates Mr Chidambaram's fundamental rights.

Promoted
Listen to the latest songs, only on JioSaavn.com
The ED had registered a case against Mr Chidambaram and others in May last year. It had registered an ECIR, the ED's equivalent of an FIR, against the accused named in the CBI complaint. These accused included Karti Chidambaram, INX Media and its directors, Peter and Indrani Mukerjea.