The encounter in Pampore began on Saturday afternoon.

Srinagar: Three terrorists holed up in a massive government campus in Pampore on the outskirts of Srinagar in Jammu and Kashmir, have been killed after a 48-hour-long gun battle, in which three Army para commandos, including two Captains, and three others died.

This was the deadliest fidayeen or suicide attack near Srinagar in six years. Mopping up operations are now on, with security personnel clearing and sanitising the Entrepreneurship Development Institute or EDI campus, spread over three buildings.

The encounter ended on Monday evening as the nation paid tribute to the heroes who died in a difficult operation to flush out the terrorists from the campus, which had many civilians trapped inside after the terrorists entered it on Saturday. 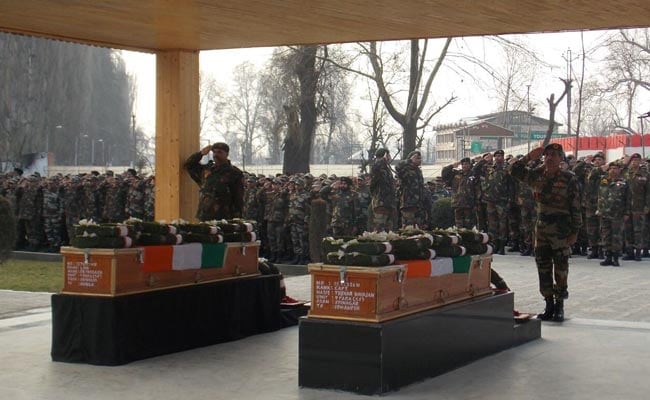 Army pays homage to soldiers who died fighting terrorists during an encounter in Pampore.

Captain Pawan Kumar, a 23-year-old 10 Para Special Forces officer, was killed while leading his men into the building on Saturday in what the Army described as a "tricky deliberate operation." Captain Tushar Mahajan, 26, and Lance Naik Om Prakash, 32, of Special Force battalion 9 Para, were killed yesterday.

The Army had said on Monday morning that all civilians had been evacuated from the buildings and police sources said the terrorists - believed to be from the Pakistan-based Lashkar-e-Taiba - would be neutralised soon.

"It is a huge campus, it has three buildings. Each of the floors has to be cleared, room by room. Specialised units are required for it, we are in complete synergy with the CRPF," said Lt Gen Satish Dua, General Officer Commanding 15 Corps.

The terrorists had entered the EDI campus on Saturday after ambushing a Central Reserve Police Force or CRPF convoy and killing two jawans. A civilian called Abdul Gani Mir was also killed in crossfire.

The terrorists used the buildings as a concrete bunker, firing at security personnel from its cover and shifting location often. The Army used heavy arms in the operation and loud explosions and heavy firing was heard.
Comments
Jammu and Kashmir encounterPampore encounter