The runway at the Jammu airport has been extended to 8,000 feet and there will be no load penalty on flights at the airport from October 1, Jyotiraditya Scindia said. 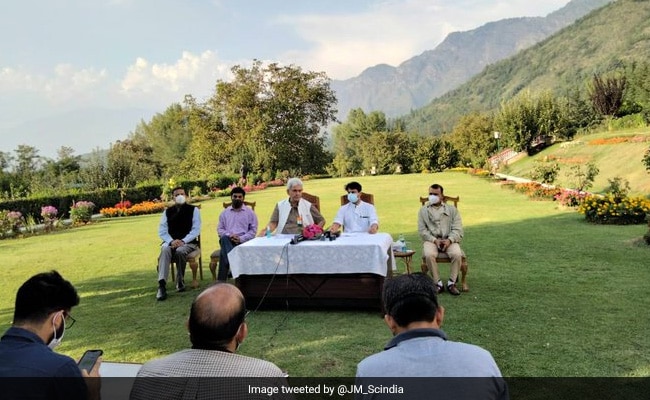 "The Jammu airport will have a new 25,000 square metre terminal," Jyotiraditya Scindia said.

International flight operations are likely to resume at the Srinagar airport as efforts are on to start services between here and Sharjah, Civil Aviation Minister Jyotiraditya Scindia said on Saturday.

"The first international flight connection from Srinagar to Sharjah (in the United Arad Emirates) will be started soon. Efforts are on so that international travellers come directly to Srinagar. This will be a historic decision, not just for Jammu and Kashmir, but the whole country," Mr Scindia told reporters.

There will be an investment of Rs 1,500 crore at the Srinagar airport, while Rs 600 crore will be spent on the Jammu airport.

"The Jammu airport will have a new 25,000 square metre terminal, adding to the existing one," the Union minister said.

The runway at the Jammu airport has been extended to 8,000 feet and there will be no load penalty on flights at the airport from October 1, he said.

The minister said a new cargo terminal at the Srinagar airport, constructed at a cost of Rs 15 crore, will be made functional on October 1.

On the issue of landing operations at the airport here, he said the Civil Aviation Ministry and the Jammu and Kashmir administration will hold discussions with the defence ministry for the installation of CAT-II ILS system for overcoming flight cancellations due to bad weather.

Mr Scindia also held a review meeting at the airport and then held an hour-long discussion with Jammu and Kashmir Lieutenant Governor Manoj Sinha for strengthening the aviation infrastructure in the union territory.

The minister said he has requested Mr Sinha to consider reducing the VAT on aviation turbine fuel to one per cent, which will help in attracting more airlines to Jammu and Kashmir.

"It will be a boost for tourism and development of Jammu and Kashmir as more flights will translate into more connectivity and more tourists," he said.

Mr Scindia said the Lieutenant Governor has also assured to transfer 122 acres of land needed for expansion of the Jammu airport to the Airport Authority of India (AAI) by October 10.

"On the same day, feasibility and design studies will be started," he said.

Mr Scindia and Mr Sinha also discussed ways of using helicopter services for promoting tourism in Jammu and Kashmir as it is being done in states like Uttarakhand.

On surging air ticket prices during the winter season, Mr Scindia said he will have the alleged cartelisation investigated.

"We will stop it if there is any cartelisation. Also, the best way to check this kind of practice is increasing the connectivity. We are taking steps in that direction," he added.

The Union minister said Article 370, which was revoked by the Centre in August 2019, was a hindrance in the way of social, rural progress and everything in Jammu and Kashmir.

"Prime Minister Narendra Modi has pledged progress and development for this region so that it touches new heights of progress, development and employment. It is with this thought that Article 370 was revoked," he said.

Mr Scindia said in the last one-and-a-half years, there has been a wave of development and progress in the union territory.

All the ministers coming, they are not here for tourism or picnic, but they are bringing something with them for joining the population of Jammu and Kashmir with the mainstream of progress and development, he added.

Union minister Nitin Gadkari will be coming here as well and will lay foundation of various developmental schemes, including a 22-km Ring Road for Srinagar at the cost of Rs 3,000 crore, he said.

Mr Scindia said under the Deen Dayal Upadhyaya Grameen Kaushalya Yojana, about 60,000 youth have been provided with the employment opportunities in Jammu and Kashmir till now.

Asked about Pakistan Prime Minister Imran Khan raking up the Kashmir issue in his video address to the 76th session of the UN General Assembly, Mr Scindia said Jammu and Kashmir, and Ladakh are the integral parts of India.

"It is a single country and if any power thinks that it will be able to cut something out of it, then they are mistaken. Our country is one and united and it will remain so," he said.