Ed Sheeran's India Concert: When, Where And For How Much You Can Buy Tickets New Delhi: Here's the good news you've been waiting - tickets for Ed Sheeran's India concert will go on sale (for the first phase) from July, reports news agency IANS. News of Ed Sheeran's India concert broke the internet last month minutes after Justin Bieber arrived for his Purpose Tour gig on May 10. Now, IANS reports that BookMyShow has partnered with the concert organisers for exclusive tickets sales on the site from July. The starting price of a single ticket is Rs 4,750 which is much, much less than that of Coldplay's Global Citizen Concert held in November 2016. It's even cheaper than Justin Bieber's concert for which ticket price ranged between Rs 5,040 and Rs 15,400.

Fans can start registering for the concert tickets from July 4 and tickets will go on sale to registered customers from July 12. The concert will take place at Mumbai's JioGarden in Bandra Kurla Complex on November 19. 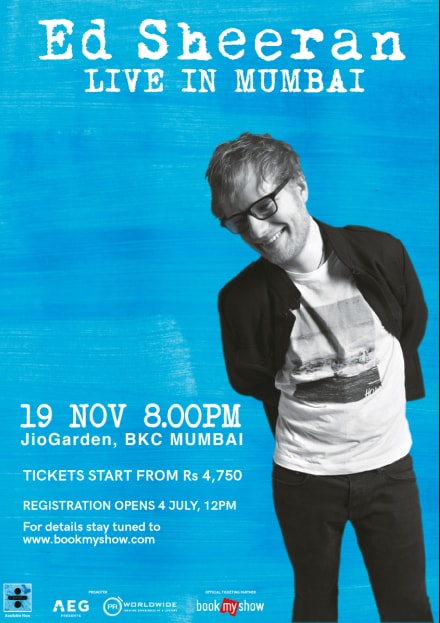 "We look forward to welcoming Ed Sheeran and are committed to ensure that the event is a phenomenal success," BookMyShow's Kunal Khambhati told IANS.

Ed Sheeran's concert is for the promotion of his third studio album (Divide) which lists Shape Of You as one the tracks. Shape Of You has enjoyed immense popularity in India with several cover versions and unique dance performances to the song. The album has total 16 songs including Eraser, Dive, What Do I Know? and Supermarket Flowers.

Promoted
Listen to the latest songs, only on JioSaavn.com
Ed Sheeran will also perform in Taipei, Osaka, Seoul, Tokyo and Bangkok as a part of the Asian leg of the promotional tour. Ed Sheeran last performed in India in 2015.