Man Arrested Over Meghalaya Mine Accident Admits To Owning It, Say Police

Meghalaya Mine Rescue: Fifteen miners were trapped in the "rat-hole" mine on December 13 after water from nearby Lytein river gushed into it. All efforts to trace the labourers have turned futile as the water level in the mine showed no signs of receding in the past 11 days. 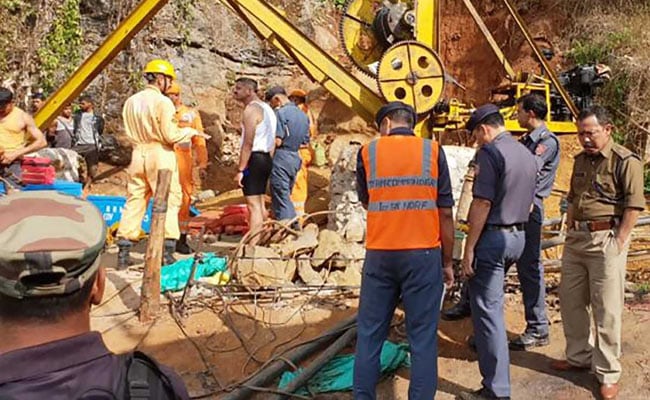 Meghalaya Mine Rescue: Family members have given up hope of the miners being rescued alive (AFP File)

The man, who was arrested in connection with the mine mishap in Meghalaya's East Jaintia Hills district a fortnight ago, has admitted that he was the owner of the 370-foot-deep illegal quarry, police said Sunday.

Fifteen miners were trapped in the "rat-hole" mine on December 13 after water from nearby Lytein river gushed into it. All efforts to trace the labourers have turned futile as the water level in the mine showed no signs of receding in the past 11 days.

Krip Chullet, who was arrested on December 14, admitted during interrogation that the mine in Lumthari village of Khliehriat area -- around 80 km from Shillong -- belonged to him, Superintendent of Police Sylvester Nongtynger told PTI.

Two mine managers, Mohesh and James Sukhlain, are still on the run, he said.

Sukhlain facilitates mine operations, while Mohesh is the person responsible for bringing labourers from West Garo Hills district and Assam, the SP said.

Earlier, the police had said Chullet was involved in hiring labourers and sending them down the shaft.

Around 20 miners had entered the 370-foot mine on December 13. After reaching the bottom of the pit, they entered the horizontal tunnels, often termed "rat-holes", as each just about fits one person.

According to local people, one of the diggers could have accidentally punctured the walls of the cave, following which the river water gushed into it. 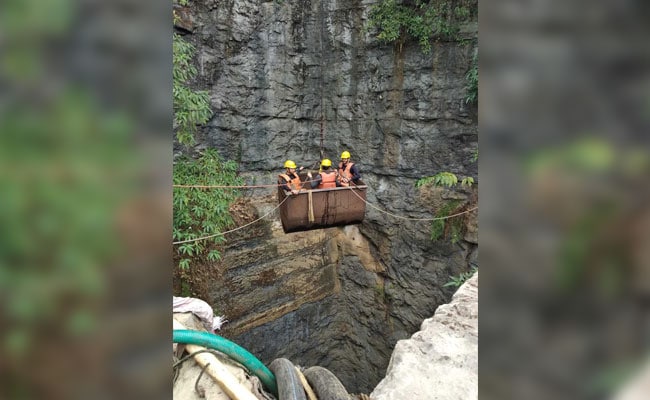 Meghalaya Mine Rescue: Over 100 personnel of the national and state disaster response forces, along with the police, have been waiting for the water level to subside to begin the rescue work

Five people were able to climb out of the flooded mine, leaving the others behind.

Seven of the 15 trapped labourers hail from West Garo Hills district, five from Assam and three from the remote Lumthari village, where the accident took place, the police officer said.

The state government had on Saturday announced an interim relief of Rs 1 lakh each to the families of the 15 miners and sought high-power submersible pumps from Coal India Ltd to flush out the water and rescue them.

Over 100 personnel of the national and state disaster response forces, along with the police, have been waiting for the water level to subside to begin the rescue work.

Mining expert Jaswant Singh Gill, who arrived at the site two days ago, has made recommendations to the state to hasten the operation, NDRF Assistant commandant SK Singh said.

The family members have now given up hope that the miners would be rescued alive.

Shohor Ali, who hails from Magurmari village in West Garo Hills district, has his son, brother and son-in-law trapped in the mine. "We have all lost hope to see them alive. I just wanted the authorities to help us retrieve the dead bodies for their last rites," he told PTI.

Mr Ali also said that all three of his family were lured to Lumthari with a promise of Rs 2,000 as wages per day.

"I was the first person to get in touch with MLA (Rajabala constituency) Azad Aman to find out about the accident," he added.

The lawmaker, on his part, said he had contacted the police as soon as he received the information. "It took the police several hours to locate the mine," the Congress lawmaker told PTI.

The Rajabala lawmawker, however, said the relief offered to the labourers was insufficient.

"I have met the chief minister (Conrad Sangma). I have also written to the chief secretary and sought help from Meghalaya Human Rights Commission demanding relief payment to the affected families," he added.