Don't Want to Harm Anyone, Only Protect Myself: Preity Zinta on Complaint Against Ness Wadia 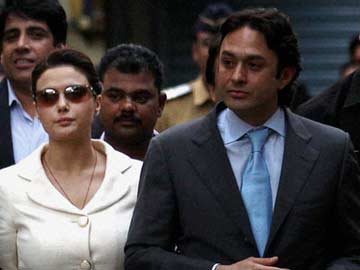 Mumbai: Actor Preity Zinta, who has accused her former boyfriend and businessman Ness Wadia of molesting her, has said that her intention behind the complaint "is not to harm anyone but only to protect myself." (Read Preity Zinta's Full Statement Here)

"This is a very difficult time for me," the 39-year old actor, who co-owns the IPL team, Kings XI Punjab with Mr Wadia, said in a statement, adding that "I would like to request the media to please respect my privacy regarding this matter."

Ms Zinta has alleged that Mr Wadia molested, abused and threatened her on May 30 inside the Wankhede stadium in south Mumbai, where an IPL match was being played between Kings XI Punjab and Chennai Super Kings.

Mr Wadia, 44, has rejected the allegations as "totally false and baseless." The two had called off their five-year-long relationship in 2009.

"I may not be super wealthy and powerful but I have truth by my side and I've worked very hard all my life and tried to earn respect for myself as a self-made professional. It saddens me that no one at work or around ever stood up for me in the past when i was abused and insulted publicly," Ms Zinta said in a statement on her Facebook page.

After her written complaint, a first information report or FIR was registered against Mr Wadia under Sections 354 (assault or criminal force to woman with intent to outrage her modesty), 504 (intentional insult with intent to provoke breach of the peace), 506 (punishment for criminal intimidation) and 509 (word, gesture or act intended to insult the modesty of a woman) of the Indian Penal Code (IPC), police sources added.

The Mumbai Police has said a decision on an arrest will be taken after examining witnesses in the case. Sources in the police say they will record statements of IPL CEO Sundar Raman and Wankhede Stadium staff, who were present when the alleged incident took place.

Promoted
Listen to the latest songs, only on JioSaavn.com
Mumbai Police Commissioner Rakesh Maria said "offence has been registered. We are trying to collect evidence like the statements of those involved and CCTV footage".