En route Thursday to the Group of 20 summit in Japan, Donald Trump lobbed a fresh salvo at India, a country the United States has sought to cultivate as a friend and strategic partner. 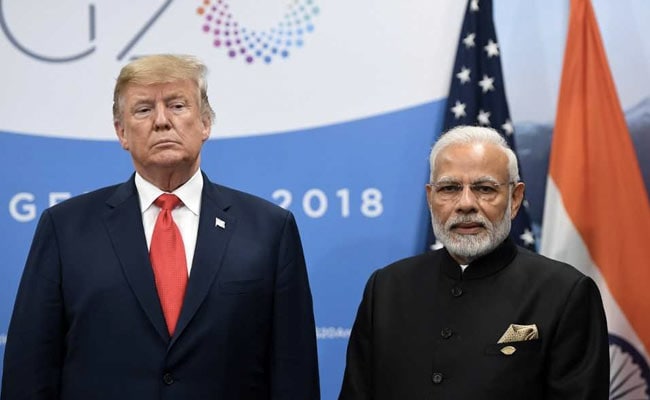 President Donald Trump believes trade wars are good and easy to win. Now he has a new target firmly in his sights: India.

En route Thursday to the Group of 20 summit in Japan, Trump lobbed a fresh salvo at India, a country the United States has sought to cultivate as a friend and strategic partner.

Trump tweeted that he was looking forward to speaking with Prime Minister Narendra Modi at the summit "about the fact that India, for years having put very high Tariffs against the United States, just recently increased the Tariffs even further. This is unacceptable and the Tariffs must be withdrawn!"

Trump's tweet came only a day after Secretary of State Mike Pompeo visited New Delhi with the goal of calming tensions between the world's two largest democracies, which include a nascent trade war.

During his visit, Pompeo called for a "new age of ambition" in ties between India and the United States. But his talks with Indian officials did not generate tangible progress to bridge differences over trade.

Q: Why are the United States and India in a trade war?

A: There has been low-grade trade friction between the two countries for some time. Last year, Narendra Modi raised tariffs in a protectionist move viewed as currying favor with voters and businesses ahead of this year's national election. Then bilateral talks to resolve narrow but long-festering issues - such as India's price caps on certain medical devices - collapsed.

Meanwhile, India said that it intended to require foreign companies to store data locally and announced a review of the rules around e-commerce, moves that alarmed U.S. technology and financial giants.

The spat blew up late last month when Trump announced that he would cancel a preferential trade status for India that had allowed $5.6 billion in Indian imports to enter the United States duty-free. About two weeks later India retaliated, announcing tariff hikes on 28 American products including almonds, apples and lentils. The tariffs hikes are reportedly worth roughly $220 million.

The sums involved are small compared to Trump's trade war with China, but they represent a significant increase in tensions between India and the United States that threatens to imperil their cooperation in other arenas such as defense.

Q: Could this get worse?

A: Quite possibly. Trump has shown himself unwilling to back down from trade fights that he initiates. His tweet Thursday reinforces the impression that he expects India to roll back its tariff hikes in full. One report suggested that the United States is mulling further punitive moves against India, including action under Section 301 of the Trade Act - the same mechanism Trump used to levy tariffs on Chinese products.

It is unclear whether India is in a mood to compromise. Narendra Modi won a massive reelection victory last month, which could give him space to negotiate - or, alternately, increase his resolve to tell the United States that India won't be pushed around.

Like many countries, India is wrestling with how to engage with a U.S. president who views the world in transactional terms focused on trade, said Navtej Sarna, the former Indian ambassador to the United States. "You can't change that," he said. "If there are rough patches, they have to be ridden out."

A: If there's one thing that sticks in Trump's mind about trade with India, it's Harley-Davidson motorcycles. He has repeatedly called out India for its tariffs on such high-end imported bikes, which represent an infinitesimal proportion of the roughly $150 billion in annual trade between the two countries.

Last year, in what India considered a concession, Narendra Modi reduced the tariff on imported bikes to 50 per cent from a range of 60 to 75 per cent. Trump scoffed: He wants the tariff to be zero, and has repeated the story ever since.