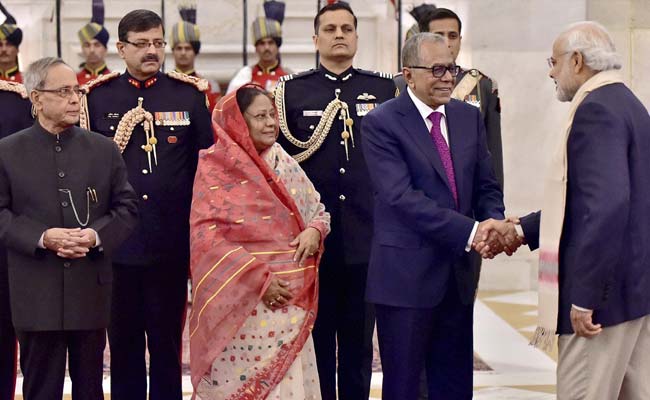 Dhaka: Bangladesh, which shares border with five Indian states, has strategic importance for India and Prime Minister Narendra Modi's visit would give an unambiguous thrust towards development of good relations between the two neighbours whose destinies are closely interlinked.

"With the new government in India, there is a very clear and unambiguous thrust towards development of good relations with our immediate neighbours and that context of the 'policy of neighbourhood first' provides the backdrop for the PM's visit to take place and move this very important relationship to a next level," Indian High Commissioner Pankaj Saran said.

He said the parliamentary ratification of the long outstanding Land Boundary Agreement (LBA) created the best possible setting for Prime Minister Modi's maiden visit to Bangladesh, which would roll out a red carpet welcome for him.

"As far as the visit is concerned, it comes against the backdrop of a very, very historic step by our government and our parliament towards ratification of the 1974 LBA and its 2011 protocol," Mr Saran told PTI ahead of Mr Modi's two-day tour which begins tomorrow.

He said, "There could be no better setting for his visit to Bangladesh then government has taken and the manner our parliament has spoken in one voice unanimously to approve an amendment to the constitution of India (ratifying the LBA)."

The officials said they have chalked up a hectic schedule according to which Mr Modi would join the flagging off ceremony of Kolkata-Dhaka-Shillong bus service and deliver a public lecture apart from holding talks with his counterpart Sheikh Hasina.

He is also scheduled to visit the Dhakeswari National Temple, the Ramkrishna Mission, the National Memorial for 1971 martyrs and the Bangabandhu Memorial Museum, call on President Abdul Hamid and attend a state banquet.

Mr Saran said India-Bangladesh relationship is one of the most important ties which India has with any neighbour "and indeed any country in the world (while) the aspects of the relationship that makes is self-explanatory - the geography, history, culture and the location of both countries".

Asked what made India to lay an extra emphasis on ties with Dhaka, he said besides having borders with five Indian states, Bangladesh is a littoral country of Bay of Bengal and it serves as the crossroads for the South Asia and Southeast Asia.

"How we develop our ties with Bangladesh has an impact on the welfare and the security of not just of Bangladesh but also of our North-East...These are the elements which make up the strategic importance of Bangladesh to India," he said.

"The destinies of both our countries are very closely interlinked... and we do not see our relations in the eyes of others," he added.