Mr Paswan's comment echoed those he made two weeks ago, when he told NDTV the BJP's vitriolic focus on anti-CAA protests during Delhi election was a mistake

Lok Janshakti Party chief Chirag Paswan has demanded strict action against three BJP leaders accused of inciting the violence that has consumed parts of Delhi, killing 38 people and injuring over 300. Speaking to NDTV, he hit out at Union Minister Anurag Thakur, Lok Sabha MP Parvesh Verma and local leader Kapil Mishra, claiming that a trend of making hate speeches began with Mr Thakur and his call to "goli maaro (gun down) traitors".

"This trend started during Delhi Assembly election when Anurag Thakur said "goli maaro (gun down) traitors", which led to a firing incident and also violence. Recently Kapil Mishra threatened (anti-citizenship law) protesters in front of police. If action had been initiated against him promptly then perhaps violence would not have spread," he said.

Mr Paswan's father, Ram Vilas Paswan, also spoke to NDTV and said: "The fact riots continued during US President's visit is a blot on our nation. Stern action must be taken against all those who are guilty".

Mr Paswan's comment echoed those he made two weeks ago, when he told NDTV that the BJP's vitriolic focus on anti-citizenship law protests during Delhi election was a mistake.

The Bihar politician also said he would make his objections known if a similar strategy were employed during Assembly election in his state later this year; the BJP and the LJP are allies.

Videos of speeches by Mr Thakur, Mr Mishra and Mr Verma were played in the Delhi High Court on Wednesday, as a two-member bench headed by Justice S Muralidhar criticised Delhi Police for delays in filing FIRs against BJP leaders over hate speech complaints.

A furious High Court asked if cops wanted to "acknowledge the presence of a crime".

Action, however, has been deferred by at least four weeks. The court, which on Wednesday gave Delhi Police 24 hours to take a "conscious decision", softened its stand. 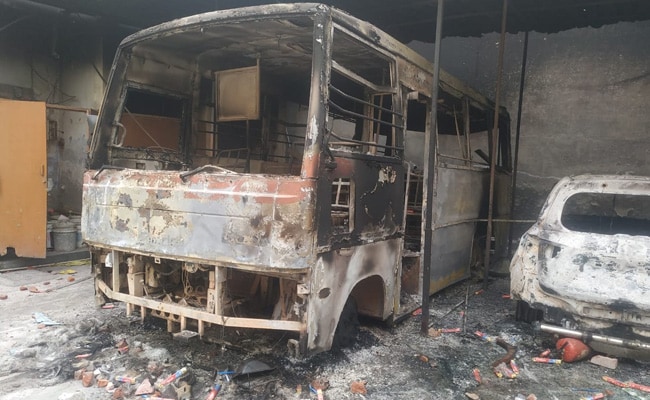 Schools, homes and shops were set ablaze by goons during violent Delhi protests

Tushar Mehta, the Solicitor General appearing for the cops and the centre, argued several alleged hate speeches had been made and suggested it was unfair to "select" only some.

Kapil Mishra, who has a history of making incendiary comments, delivered a pro-CAA speech in northeast Delhi's Maujpur neighbourhood hour before violence broke out. In his speech, which was caught on video, he was seen giving Delhi Police an ultimatum.

He was earlier punished by the Election Commission for comments about "mini-Pakistans" in Delhi - a reference to Shaheen Bagh protests in the national capital, but no FIR was filed.

Similarly shocking speeches were made by Mr Thakur during campaigning for Delhi polls. Anurag Thakur received only a 72-hour campaigning ban for his comments and no FIR was filed.

Meanwhile, Mr Paswan also criticised the centre and Delhi Police of failing to suspend mobile internet in affected areas - a tactic employed frequently by the BJP-led government to quell protests.

In August last year, the centre shut down the internet in Kashmir for over 150 days to control backlash against its contentious decision on Article 370.

"Why was internet not suspended in affected areas? Why was WhatsApp group not monitored?" Mr Paswan asked, on a day when Delhi Police sources said goons had organised themselves and whipped up frenzy via videos and messages on WhatsApp groups.