The Centre vs State credit war comes as farm fires in Punjab during the last week of September have increase four-fold this year as compared to 2018.

Air Quality Index Delhi: Between September 23 to October 1 this year, 159 fires were reported in Punjab.

Environment Minister Prakash Javadekar on Monday listed several measures taken by the centre to combat air pollution in Delhi, claiming that pollution in the national capital will be less this year, compared to previous years. The minister's statement comes as the Delhi government put out advertisements taking credit for improving the city's air quality.

"The Centre is fighting the problem of pollution, which is our only concern. We believe that people will not get confused by the claims of others who want to take credit," Mr Javadekar said, adding that that pollution in the national capital fell by 18 per cent in 2018, compared to 2016.

Delhi Chief Minister Arvind Kejriwal hit back with a sarcastic remark. "All credit to BJP for less pollution, for mohalla clinics, for less dengue cases, for constant power supply; urge them to ensure that stubble burning reduces too, stubble smoke from Haryana and Punjab negatively affects Delhi," he said.

The credit war comes as farm fires in Punjab during the last week of September have increase four-fold this year as compared to 2018. The centre's measures -- allocating over Rs 1,100 crore and distributing more than 20,000 machines to farmers to tackle the issue of crop burning -- has failed to curb stubble burning.

Between September 23 to October 1 this year, 159 fires were reported in Punjab, as compared to 25 during the same period last year. 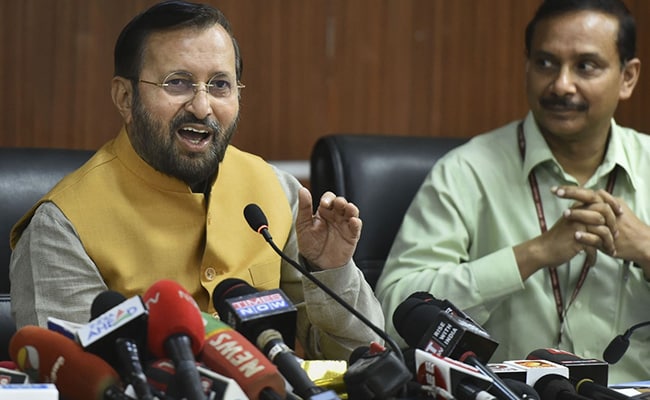 "It our compulsion to burn the stubble in our field (since) the machinery provided by the government is very expensive and we cannot afford it," Harjit Singh, a farmer in Punjab, told NDTV.

A senior Punjab government official also questioned the feasibility of the machines provided by the Centre. "The machinery provided by us to farmers adds a cost to their expenses. We are still awaiting for the Centre's response to it," said Vishwajeet Khanna, Additional Chief Secretary, Punjab.

The union minister too admitted that the problem of stubble burning remains. "This is an air shed problem, not a State problem or municipal corporation problem. Therefore all 5 states (Delhi, Punjab, Haryana, UP and Rajasthan) meet every three months," Mr Javadekar said.

"Haryana and Punjab farmers have been burning crop stubble for years. If wind blows towards Delhi, it becomes a serious concern," he said.

With farm fires picking up and litte or no wind at the surface to blow away pollutants, there's likely to be a "drastic deterioration" in Delhi's air quality by the next weekend, a government agency said.