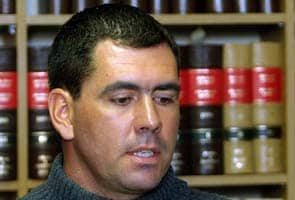 Police filed the charges in a New Delhi court against bookmakers and Cronje himself, who died in a plane crash in 2002, over allegations of fixing dating back to South Africa's tour of India in 2000. The charges are the first by the Delhi Police over the scandal, which revealed the shady world of Indian bookmakers in cricket.

"There are six accused in this case, three of them are on bail while two are abroad," Inspector Keshav Kumar told the court. "The sixth is Hansie Cronje, who is dead," Mr Kumar, the investigating officer in the case, said.

Cronje, once the darling of South African cricket, was banned from the sport for life after admitting taking bribes from bookies in exchange for providing match information and influencing games during the 2000 tour. He admitted to a South African commission investigating the scandal to taking thousands of dollars in bribes from bookies to underperform, although he denied match-fixing itself.

Delhi Police have alleged that Cronje persuaded some of his teammates, including Herschelle Gibbs, to agree to underperform in a one-day match in 2000, including by making fewer runs than he might otherwise have tallied. Gibbs and bowler Henry Williams were both banned from playing for six-months and fined by South African authorities over their admissions in the scandal.

The scandal broke when the Delhi Police, working on an unrelated extortion case, tapped a telephone conversation between Cronje and one of the bookies, Sanjeev Chawla. Chawla is believed to be living in the UK and Indian police hope to seek his extradition now that the charge sheet has been placed before the court.

"We will now request the court to grant approval to seek extradition of Chawla from the UK to India," Additional Commissioner of Police (Crime), Ravindra Yadav, told AFP. "The UK government does not allow extradition without the charge cheet. We are almost sure Chawla is in England," he said.

Mr Yadav said the case was one of "criminal conspiracy" and has only now been filed in court after police finally received in January this year voice samples from tapped phone conversations. "People went to the ground to watch the games thinking they would be played in the true spirit. They did not know the outcome was fixed. That's why we have filed the charges," he said.

Police named the accused as bookmakers and gamblers Rajesh Kalra, Krishan Kumar and Sunil Dara -- who are all on bail -- and Chawla and Manmohan Khattar who are overseas.

Cronje died in June 2002 when a light plane in which he was travelling crashed in bad weather in South Africa.

Monday's action came after Delhi police chief Neeraj Kumar told local media that he planned to file charges in the Cronje case and a separate Indian Premier League spot-fixing scandal, before the end of the month.

The Indian Premier League (IPL) was rocked by allegations of spot-fixing in May this year, with some 29 people arrested including three Indian players. The cricketers, who have denied wrongdoing, are accused of deliberately bowling badly in exchange for tens of thousands of dollars from bookies.

Promoted
Listen to the latest songs, only on JioSaavn.com
Betting on sports is illegal in India except at horse races, but major betting syndicates have been in operation for many years.