An oral mention was made to stop farmers from moving towards Delhi borders and directions for the police to enforce COVID guidelines so that the event does not turn into super spreader. 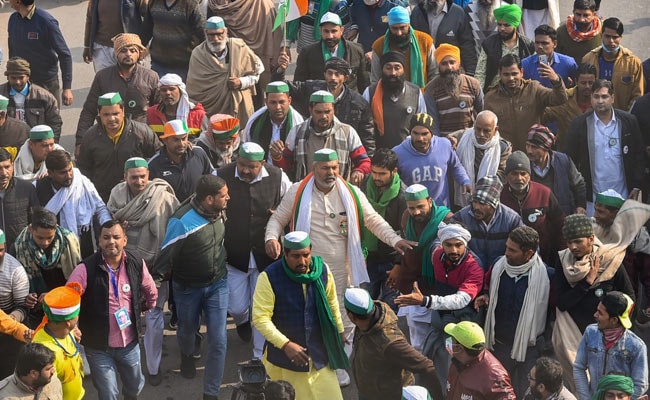 The Delhi High Court Tuesday refused to look into the issue of proposed march by farmers into the national capital on Wednesday as it marks six months of their protest against the new farm laws.

An oral mention was made to stop farmers from moving towards Delhi borders and directions for the police to enforce COVID guidelines so that the event does not turn into super spreader.

A bench of Justices Vipin Sanghi and Jasmeet Singh said the issue concerning farmers protest was being looked into by the Supreme Court and the high court will not examine it.

The matter was mentioned before the bench when it sat for hearing pleas concerning COVID-19 issues.

Advocates Dhananajay Grover and Praveen Sharma submitted that around one lakh farmers have arrived in Delhi and more are coming to participate in the protest scheduled for Wednesday and if it is not stopped, the site will become a super spreader of COVID-19 infection.

They said there could be roadblocks and oxygen supply could be disrupted and sought directions to the Delhi Police and Centre to stop farmers from coming here and holding the protest.

The court, however, declined to entertain the prayer and observed that oxygen supply is going on.

As May 26 marks six months since the farmers protest began in November last year against the Central government's controversial farm laws and the Bharatiya Kisan Union (BKU) has given a call to the farmers to march to the capital.

"Tomorrow, May 26 will mark six months of farmer protests. Harvest season is over. BKU and farmer unions are coming to Delhi," the counsel said, adding that there is a need to look at preparedness in facing potential issues that could arise due to the march.

Thousands of farmers, mainly from Punjab, Haryana and western Uttar Pradesh, have been protesting at various border points of Delhi for last six months against the three laws -- the Farmers' Produce Trade and Commerce (Promotion and Facilitation) Act, the Essential Commodities (Amendment) Act, and the Farmers (Empowerment and Protection) Agreement on Price Assurance and Farm Services Act.