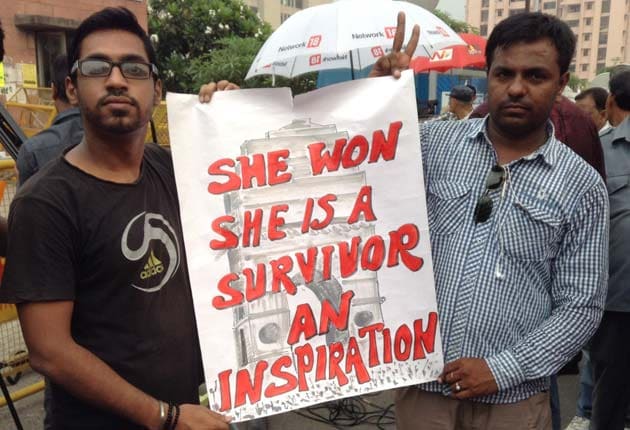 New Delhi: Four men have been given the death sentence for the fatal gang-rape of a young medical student on a moving Delhi bus, an attack that shocked India and ignited weeks of protests demanding better safety for women and swift justice for the 23-year-old who was killed.

"This has shocked the collective conscience of society," Judge Yogesh Khanna said. "In these times when crime against women is on the rise, courts cannot turn a blind eye towards such gruesome crime. (Read verdict on death sentence here)

The judge said the student was "tortured till the very end" and that the case fell into the "rarest of rare category", which justified capital punishment.

"We are happy. Justice has been delivered," said the student's father with his wife and two sons by his side. (Delhi gang-rape: 4 convicts get death; we are happy, says girl's father)

One of the convicts, Vinay Sharma, broke down in tears as the sentence was announced. Along with Akshay Thakur, Pawan Gupta, and Mukesh Singh, he was sentenced to death by hanging at a fast-track court in Delhi today. (The four men who have been given the death sentence)

Defence lawyer AP Singh dramatically wiped tears away as he told reporters that the verdict has been influenced by public and political pressure.

Home Minister Sushil Kumar Shinde rejected that allegation and said justice has been served to the student and her family.

The woman, a trainee physiotherapist, and a male friend were lured onto a bus by five men and a teenager. The woman was then repeatedly raped and tortured with an iron rod. She died two weeks later.

Promoted
Listen to the latest songs, only on JioSaavn.com
One of the six men arrested in connection with the attack committed suicide in prison in March, while the teen was sentenced by a juveniles court to three years in a reform centre. (Juvenile found guilty of rape and murder, gets less than three years in reform home)

Enraged by the attack, thousands of demonstrators had marched in different cities, forcing the government to introduce tougher laws to punish sexual offences; special courts to try rape cases quickly were also sanctioned.

"Embarrassing Day For Country": Congress On Assam Advisory Against Travel To Mizoram