Delhi Election schedule: The term of the 70-member Delhi Assembly ends on February 22 and a new government must be in place before that date.

Delhi Assembly elections will be held on February 8 and counting will take place on February 11, with results expected the same day, Chief Election Commissioner Sunil Arora said today. Addressing reporters Mr Arora said the Election Commission (EC) was committed to "fair polls" and said 13,000 polling stations would be set up and nearly 90,000 officials would be deployed to ensure everything goes smoothly.

The EC also confirmed that the model code of conduct was in force with immediate effect. The poll body also reminded the government that no state-specific schemes could be announced during the Budget speech on February 1

The term of the 70-member Delhi Assembly ends February 22 and a new government must be in place before that date. 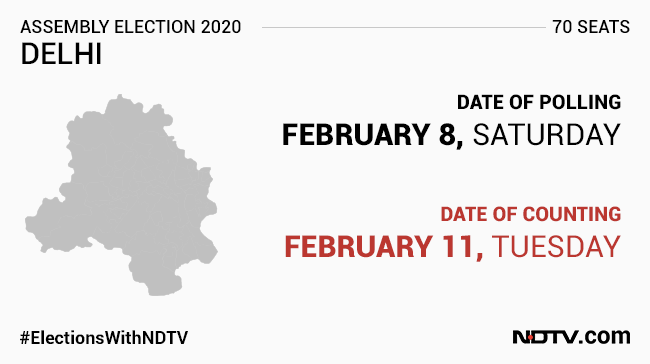 Delhi elections will be held in a single phase next month.

This will be the first election since Prime Minister Narendra Modi's BJP slipped to a surprise defeat in Jharkhand - its second state of 2019 - last month; the BJP lost to an opposition alliance led by the Jharkhand Mukti Morcha and including the Congress.

This will also be the first polls in the national capital since the BJP swept to a massive win in Lok Sabha polls early last year; the party won all 7 parliamentary seats in Delhi.

Chief Minister Kejriwal's AAP is seeking re-election after recording a massive win in 2015; the AAP won 67 of 70 seats, with the remaining three going to the BJP and the Congress drawing a blank. The party had previously been in power for 15 years between 1998 and 2013.

Two years earlier the AAP had won only 28 seats but still managed to form the government after "unconditional support" from the Congress, which won 8 seats. Together the two edged past the BJP's haul of 32 seats.

Some issues the AAP, the BJP and the Congress - three main parties - are likely to focus on are the pollution crisis that engulfed the city state in the final few months of last year and controversy over the centre's move to regularise 1,731 unauthorised residential colonies.

The controversial citizenship law is also likely to feature prominently, particularly since Mr Kejriwal has joined a long list of non-BJP state leaders and politicians who have voiced opposition to it and programmes like the NRC and NPR.

The AAP launched its campaign last month, with Deputy Chief Minister Manish Sisodia saying he was confident of success. The party also revealed its slogan - 'Ache beete 5 saal, lage raho Kejriwal (Past 5 years have been good, keep going with Kejriwal').

The party has signed poll strategist Prashant Kishor and his Indian Political Action Committee (I-PAC) in its re-election bid. Mr Kishor was widely credited for the "chai per charcha" campaign that helped Prime Minister Narendra Modi and the BJP to power in 2014.

The BJP also launched its campaign last month, with PM Modi leading a rally at the city's Ram Laila Maidan. He used the occasion to target opposition parties, and especially the Congress, over nationwide protests against the citizenship law.