Prashant Kishor's Indian Political Action Committee (I-PAC), which is widely credited for the "chai pe charcha" campaign that helped the BJP to power in 2014, is also working with Bengal Chief Minister Mamata Banerjee

Arvind Kejriwal's ruling Aam Aadmi Party (AAP) has launched its campaign for Assembly elections in Delhi next year, with Deputy Chief Minister Manish Sisodia saying the AAP government will take its "report card to the people" next week. Mr Sisodia also expressed confidence "the public will vote for us because of the good work we have done". The party also revealed its official slogan - 'Ache beete 5 saal, lage raho Kejriwal (Past five years have been good, keep going with Kejriwal') - at today's event.

AAP, which won 67 of 70 seats in the last election, will fight this one in collaboration with master strategist Prashant Kishor's consultancy firm Indian Political Action Committee (I-PAC), which has been widely credited for "chai pe charcha" campaign that helped the BJP to power in 2014.

I-PAC is also working with Bihar Chief Minister Nitish Kumar's Janata Dal (United), a key ally of the BJP and a member of the BJP-led National Democratic Alliance (NDA) at the centre. Mr Kishor is also a senior office-bearer of the JDU.

Mr Kishor and the JDU have had a public falling out over the controversial new Citizenship (Amendment) Act, or CAA. Mr Kishor, whose wife is Assamese, has been highly critical of the CAA, which was pushed through parliament by Union Home Minister Amit Shah last week.

His comments even provoked Bihar Chief Minister Nitish Kumar into issuing a sharp notice through one of his ministers: "I will not name anyone but if somebody has a problem he free to leave the party," JD(U) MP Ram Chandra Prasad Singh said. 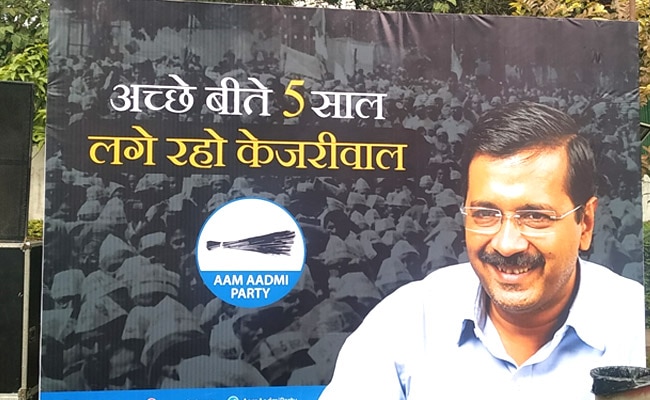 Meanwhile, at today's event, AAP leaders exuded confidence that the people of Delhi would vote for them once again.

"For the next two days marches will be carried out in 70 constituencies of Delhi. On December 24 a report card will be launched and on December 25 AAP workers will carry that report card to people in a door-to-door campaign," Manish Sisodia said.

"700 meetings will be held in 10-15 days. 7 big Townhall meetings will also be held," he said, adding, "The public will vote for us because of the good work we have done".

AAP leader Sanjay Singh, who was also at the launch, said the party had delivered more than the 70 promises made ahead of 2015 polls.

"AAP made 70 promises in its manifesto. We have done more work than that. (Government) schools had spiderwebs all over... now they are better than private schools. Our medical clinics (are) being discussed on a global level. This slogan represents our work in the last five years," he said.