Deepika Padukone arrived at the JNU campus around 7:30 pm, attended a public meeting for around 15 minutes and left after speaking to a few members of the students' union.

Though Ms Padukone did not speak at the university, she was seen standing with a group of students who were attacked including president of the students' union Aishe Ghosh. Former student leader Kanhaiya Kumar was also present.

Sources close to Ms Padukone said she had gone to express solidarity with the students. 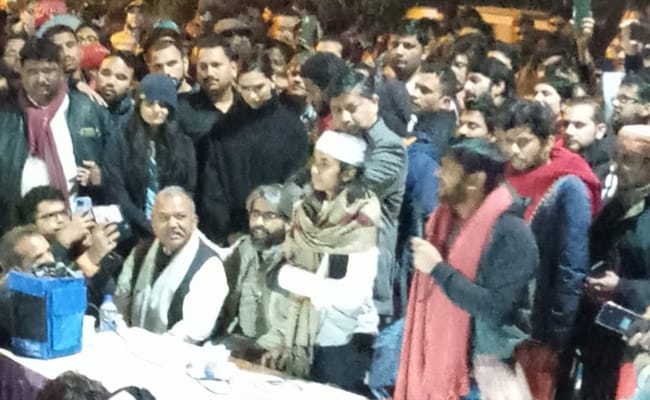 The Padmaavat star reached the leafy campus in South West Delhi around 7:30 pm, attended a public meeting for around 15 minutes and left after speaking to a few members of the students' union.

RT if you will Boycott Movies of @deepikapadukone for her Support to #TukdeTukdeGang and Afzal Gang pic.twitter.com/LN5rpwjDmT

Others, however, supported the actor.

The move by Ms Padukone, one of Bollywood's top stars, stood out amid conspicuous silence by film industry A-listers on student protests and the demonstrations across the country against the controversial Citizenship Amendment Act.

Yesterday, Ms Padukone had spoken to NDTV about the protests, saying that she was proud "people are not scared".

"I feel proud that we are not scared. I think to be able to express ourselves. I think the fact we are thinking about this and about the future of our country... it is nice to see people are coming out on the streets to voice this and express [themselves]. Because if we want to see change, this is very important," she said.

On Sunday, masked men had burst into the JNU, one of India's most prestigious universities, and attacked students with sticks and rods. The police, which was accused of doing little to stop the attackers, has filed a case against those who were attacked.

The police have charged Aishe Ghosh, who was badly injured in the attack, and 26 others with vandalism during a protest against a hostel fee hike that had led to a clashes between the Left and Right Wing students.

The Left-controlled students' union and the teachers' association has blamed the attack on members of the BJP-liked student body Akhil Bharatiya Vidyarthi Parishad or ABVP. ABVP has denied any involvement in the attack.