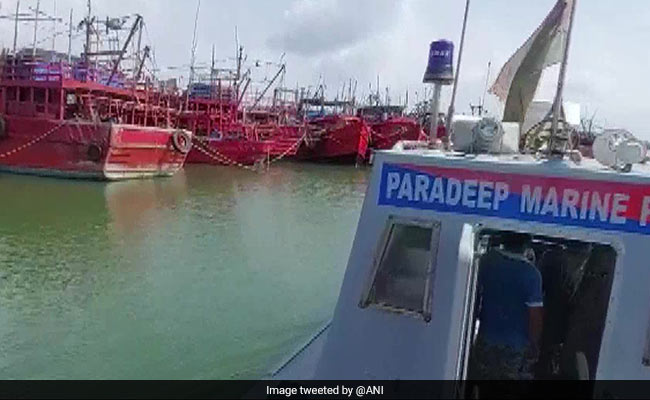 Cyclonic storm Yaas is very likely to make landfall near Balasore in north Odisha with a speed of 155 kmph to 165 kmph, gusting to 185 kmph, around noon on May 26, the Met department said on Monday.

"It will cross into the land between Paradip in Odisha and Sagar island in West Bengal, close to Balasore," Mr Bandopadhyay said.

The system will have a sustained speed of 90 kmph to 100 kmph, gusting to 110 kmph, along and off Odisha coast on May 26 morning, he said.

"At the time of landfall near Balasore, wind speed will reach 155 kmph to 165 kmph, gusting to 185 kmph, along and off Jagatsinghpur, Kendrapara, Bhadrak and Balasore districts in Odisha and in East Midnapore district of West Bengal," Mr Bandopadhyay said.

Coastal areas of North and South 24 Parganas district of West Bengal will experience 90 kmph to 100 kmph wind speed, gusting to 120 kmph, he said. Wind speed on May 26 in Kolkata, Howrah and Hooghly will reach 70 kmph to 80 kmph gusting to 90 kmph, he said.

The districts in Gangetic West Bengal will experience wind speed of 55 kmph to 65 kmph, gusting to 75 kmph from May 26 evening to May 27 morning, the Met official said.

Yaas will lead to storm surge on the coasts of Balasore, Jagatsinghpur, Kendrapara and Bhadrak in Odisha, he said. It will also cause a storm surge of two to four metres along the coastline of East Midnapore and one to two metres in the South 24 Parganas district, he said.

Sea conditions will be very rough to phenomenal on May 26, the Met department warned and advised fishermen not to venture into the sea till further information.

In West Bengal, the coastal districts of East and West Midnapore, South and North 24 Parganas, along with Howrah and Hooghly are experiencing light to moderate rainfall in many places since Monday noon.

Moderate rainfall with heavy to a very heavy downpour at one or two places will occur in these places from May 25 owing to the system, the weatherman said.

On May 26, the spread and intensity of rain will increase with the possibility of "extremely heavy rainfall" in Jhargram, East and West Midnapore, North and South 24 Parganas, Howrah, Hooghly and Kolkata, Mr Bandopadhyay said.