Read inOther Languages
This Article is From Mar 31, 2020

Centre on Monday said it was trying to procure bulk quantities of such gear, called personal protective equipment (PPE), domestically and from South Korea and China to meet the shortages. 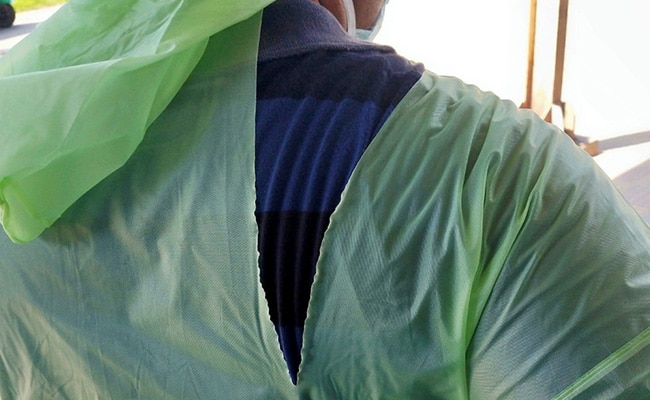 Some doctors are forced to use raincoats and motorbike helmets due to shortage of equipments..

Shortages of protective health gear in the country are forcing some doctors to use raincoats and motorbike helmets while fighting the coronavirus outbreak.

Centre on Monday said it was trying to procure bulk quantities of such gear, called personal protective equipment (PPE), domestically and from South Korea and China to meet the shortages.

But more than a dozen doctors on the front lines of treating the novel coronavirus, which has so far infected 1,251 people in India and killed 32, told Reuters they were concerned that without proper masks and coveralls, they could become carriers.

In Kolkata, junior doctors at the major coronavirus treatment facility - Beleghata Infectious Disease Hospital - were given plastic raincoats to examine patients last week, according to two doctors there and photographs reviewed by Reuters.

"We won't work at the cost of our lives," said one of the doctors, who declined to be named because he feared retaliation from the authorities.

In Haryana, Dr Sandeep Garg of ESI Hospital said he had been using a motorbike helmet because he didn't have any N95 masks, which offer significant protection against virus particles.

"I put on a helmet - it has a visor in front so it covers my face, adding another layer over the surgical mask," Dr Garg said.

The ministry of health did not immediately respond to Reuters queries.

The plight of doctors in the pandemic has cast a light on a dilapidated and overburdened public health system that has for years been starved of funds and an overhaul.

India spends about 1.3% of its GDP on public health, among the lowest in the world.

"We are living on a prayer, it's not that we can save ourselves by relying on the health system," said a senior central government official in New Delhi, who declined to be named because of the sensitivity of the situation.

In a state-run hospital in Haryana's Rohtak, several junior doctors have been declining to treat patients unless they have adequate safety equipment.

They also established an informal COVID-19 fund, to which each doctor contributed Rs 1,000 to buy masks and other face coverings, one of the doctors said.

"Everybody is scared," the doctor said. "Nobody wants to work without protection."