Coronavirus Lockdown: Eighteen buses carrying students from Assam and 31 with students from Haryana were scheduled to leave Kota on Friday, ADM (administration), Kota Narendra Gupta, who is monitoring the task, said. 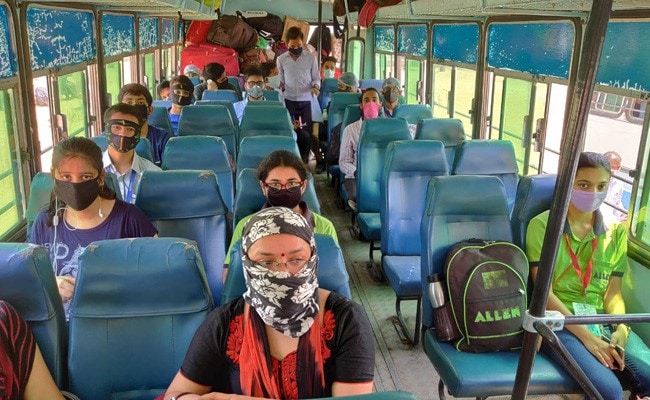 Nearly 1,400 students from Assam and Haryana left Kota for their home towns

Nearly 1,400 students from Haryana and Assam left Kota for their home towns by buses this morning, while over 2,000 from various places in Rajasthan are scheduled to leave in the evening. Meanwhile, students from Bihar have appealed to Nitish Kumar, the Chief Minister of their home state, to make arrangements for their return and staged a silent protest in Kota.

Eighteen buses carrying students from Assam and 31 with students from Haryana were scheduled to leave Kota on Friday, ADM (administration), Kota Narendra Gupta, who is monitoring the task, said.

The Assam government had hired buses from private operators to take the students from the state back home, an official of a coaching institute who is associated with the task of sending students home, said.

Over 2,000 students from various cities and towns of Rajasthan were also scheduled to leave Kota in the evening, he added.

Meanwhile, over 12,000 students from Bihar, who are stuck here since the nationwide lockdown to curb the spread of coronavirus was imposed, appealed to Nitish Kumar to call them back on Thursday.

They held up placards with the appeal written on those from their respective places while maintaining social distancing.

Shahbaz (18), an NEET aspirant, and his roommate in a paying guest accommodation, Aajam Hussain, both from Bihar's Katihar district, said they were desperate to go home as it was getting more and more difficult to spend even a single day here amid a critical problem of food and the panic surrounding the COVID-19 pandemic.

The approval to send back 190 students from Punjab and nearly 500 from Jammu and Kashmir is yet to be received from the respective states governments, a district official said.

At least 13,000 students from Uttar Pradesh, 2,800 from Madhya Pradesh and 350 from Gujarat had already reached their home towns from Kota, which is known for its coaching centres to prepare students for competitive exams, in the last few days, he added.