Coronavirus: 6 Stopped As Air India Flies Back 324 Indians From China

Coronavirus: India has thanked the Chinese government for facilitating the special flight to evacuate the Indians from Wuhan.

A specially-prepped Air India Boeing 747 brought back 324 Indians stranded in China's Wuhan, amid the coronavirus outbreak that has killed over 200 people. The plane, which carried five doctors from Delhi's Ram Manohar Lohia Hospital and an Air India paramedic, landed in the national capital this morning.

As infected passengers pose serious health risk to cabin crew, pilots and the fellow passengers, all the Indians would be thoroughly examined by medical practitioners. Another special flight to China is also scheduled from Delhi at 12:50 pm today with a different set of crew and the same doctors. "The rescue team is again headed by Captain Amitabh Singh, Director Operation, Air India,"  an Air India spokesperson was quoted as saying by news agency PTI.

The departure of the flight was delayed from Wuhan airport as the immigration and Chinese authorities did not allow six Indians on board after they reported high temperatures during screening.

"Six passengers were offloaded as they had high temperatures," a passenger told news agency ANI.

Among those who returned from Wuhan today are three minors and 211 students.

India has thanked the Chinese government for facilitating the special flight to evacuate the Indians from Wuhan. "An Air India flight carrying 324 Indian nationals from the coronavirus hit Hubei Province of China took off from Wuhan in the early hours of Feb 1. Majority of the passengers were Indian students. We sincerely thank the Chinese government for facilitating this flight," the Indian embassy tweeted.

An Air India flight carrying 324 Indian nationals from the coronavirus hit Hubei Province of China took off from Wuhan in the early hours of Feb 1. Majority of the passengers were Indian students. We sincerely thank the Chinese government for facilitating this flight. (1/3)

The Indians who were evacuated from Wuhan have been quarantined in a specially prepared facility in Manesar near Delhi, the Indian Army, which has mounted a full-fledged operation for this purpose, said. The facility will house approximately 300 students who will be observed for signs of infection for two weeks by a team of doctors and medical personnel. 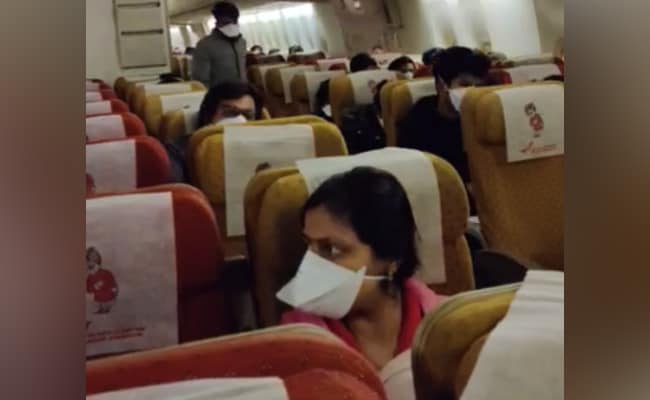 Coronavirus: The Indians who returned from Wuhan will be thoroughly examined by medical practitioners.

The Indians were at the airport by a joint team of Airport Health Authority (AHO) and Armed Forces Medical Services (AFMS). Individuals suspected of infection will be shifted to an isolation ward at Base Hospital Delhi Cantonment (BHDC).

During the screening, students are classified into three groups.

The first group consists of "suspected cases" - individuals with signs of fever/cough and/or respiratory distress. These will be transferred directly to the BHDC.

The second group consists of "close contact cases" - those who do not show symptoms but have visited seafood or animal markets (the virus is suspected to have broken out at a seafood market in Wuhan) or have had contact with a Chinese person showing symptoms in the last 14 days.

Such individuals will be escorted, in an earmarked vehicle, directly to the facility.

The third group is referred to as "non-contact cases". These are individuals who do not display any symptoms or have not had contact with a possibly infected Chinese person in the past fortnight.

This group, which will also be sent to the quarantine facility, will also include those who do not fit into either of the first two categories.

All individuals in the facility will wear three-layered masks and undergo daily medical examination. If, after 14 days, they show no symptoms, they will be allowed to go home.

However, they will continue to be under district/state surveillance and their medical records will be forwarded to concerned authorities for follow-up.

India reported its first positive case of coronavirus on Thursday - a Keralite student from Wuhan University.