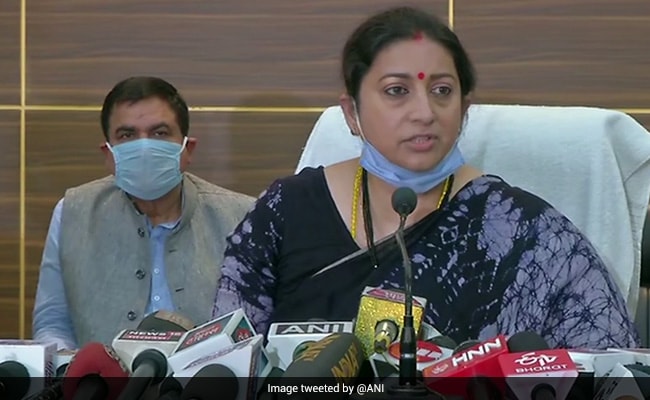 Union Minister Smriti Irani said her party will win the Rae Bareli seat too in next elections. (File)

"Rahul Gandhi uses foul language against Prime Minister Narendra Modi and is indulging in lies to create confusion in the country," she said on the second day of her visit to her parliamentary constituency.

Ms Irani who reached Amethi on Friday for a three-day visit made the remark while addressing people after laying foundation stones of various developmental projects and inaugurating different welfare schemes in her constituency.

The Union minister alleged that the Gandhi family and Rahul Gandhi have knowingly thrown farmers and the poor in poverty to do their politics without any hurdles.

Amethi has already bid goodbye to Rahul Gandhi and Rae Bareli too would do the same to the Gandhi family in 2024, she said, claiming that her party will win the Rae Bareli seat too in the next Lok Sabha elections.

Ms Irani said it was not easy for a woman belonging to a common family to fight against the Gandhi family. "I have faced a lot of humiliation but it is the love of the people here that I am standing here as your MP," she said.

"How can someone, who has never seen poverty, know the pain of the poor?" she asked, alleging that Rahul Gandhi has grabbed the land of farmers and snatched their rights.

"How can those living in palaces of gold know the plight of farmers?" she asked.

Uttar Pradesh Deputy Chief Minister Keshav Prasad Maurya, who was present at the event, also charged the Congress with neglecting the development of Amethi. He also accused the West Bengal government of depriving the farmers of the benefits of the central scheme in the state.