Congress Protests Against Alleged Burning Of Copy Of Constitution

Delhi Police arrested a 40-year-old man on Saturday for allegedly burning a copy of the Constitution in protest against the amendments in the SC/ST (Prevention of Atrocities) Act. 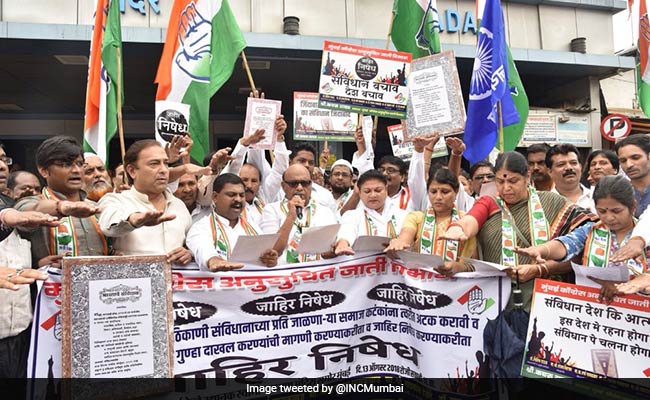 The Mumbai Congress staged on Monday a protest against the alleged burning of a copy of the Constitution in New Delhi and demanded that sedition charges be slapped on the accused.

The Delhi Police arrested a 40-year-old man on Saturday for allegedly burning a copy of the Constitution in protest against the amendments in the SC/ST (Prevention of Atrocities) Act.

Leaders and workers of the Mumbai Congress held a protest outside the Dadar railway station in Mumbai and strongly condemned the incident, which they said, disrespected the Constitution and its chief architect B R Ambedkar.

Former Congress MP from South Central Mumbai Eknath Gaikwad, who led the protest, said, "Just arrest is not enough. We demand that the accused be slapped with sedition charges so that nobody dares to do such a thing again."

Mr Gaikwad accused the BJP-led government at the centre of "instigating" such elements. The protesters shouted slogans against the Modi government, accusing it of trying to "dilute" the basic characters of the Constitution.

Anil Tanwar, the national in-charge of the Akhil Bhartiya Bheem Sena, had filed a complaint at the Parliament Street police station on Saturday, alleging members of the Youth for Equality burnt the copy of the Constitution and shouted slogans against B R Ambedkar.

The complainant also submitted a CD containing a video of the incident, police had said. During investigation, it was revealed that on August 9, two different organisations -- the Youth Equality

Foundation (Azad Sena) and the Arakshan Virodhi Party -- held a joint protest at the Parliament Street, the police said.

The Arakshan Virodhi Party participated in the protest under the leadership of Deepak Gaur and Youth Equality Foundation was headed by one Abhishekh Shukla. Three police teams were formed to nab the accused.

The teams raided the houses of suspects in different parts of Delhi, Haryana and Utar Pradesh but they were found absconding.

Subsequently, the police nabbed Gaur from Faridabad. During interrogation, he revealed that he and Shukla conspired to burn the copy of the Constitution with an intention to bring the attention of government against the amendments in the SC/ST Act, the police said.

The amendments restored key provisions of the Act that were "diluted" by the Supreme Court in March.