Sena-NCP-Congress have sequestered their MLAs to luxury hotels across Mumbai to protect them from any attempts at poaching.

The Shiv Sena MLAs were taken to Hotel Lalit in Mumbai's Andheri.

Swift political developments in Maharashtra - with the stunning return of the BJP to power in the state - have prompted the Shiv Sena, Sharad Pawar's party and the Congress to move their MLAs to different hotels. The MLAs have been sequestered in an attempt to protect them from poaching. The three parties have taken their MLAs to luxury hotels in Mumbai itself, anticipating that they will have to be rushed in anytime to the state assembly for a floor test in which the BJP has to prove its majority.

The Shiv Sena has moved 55 of its 56 MLAs to Lalit Hotel in Mumbai's Andheri. They have also been ordered to surrender their mobile phones, Sena sources told news agency IANS.

The Congress, meanwhile, has moved its 44 MLAs to JW Marriott in Mumbai.

However, independent MLA Rajkumar Patel told NDTV that eight independents are staying at a hotel in Goa where the Sena MLAs are.

Sources from the Congress and the Sena have said keeping their MLAs together would be crucial to defeating the BJP in a floor test that may be held by November 30.

Sharad Pawar on Saturday said the BJP will lose the trust vote, alleging that his nephew Ajit Pawar, who took oath as deputy Chief Minister, had misled the Governor and handed him letters of support that had been taken for the Shiv Sena-led alliance.

This is not the first time either party has guarded its MLAs in this fashion; earlier this month the Congress moved its MLAs to Rajasthan, a state where it is in power, and the Shiv Sena sent its MLAs to a hotel near party chief Uddhav Thackeray's home.

"There is no chance our MLAs will break. We are ready to defeat the BJP in the floor test. We will work out a strategy soon. We will fight BJP forming government in Maharashtra on both fronts- politically and legally," Congress leader Ahmed Patel said on Saturday. 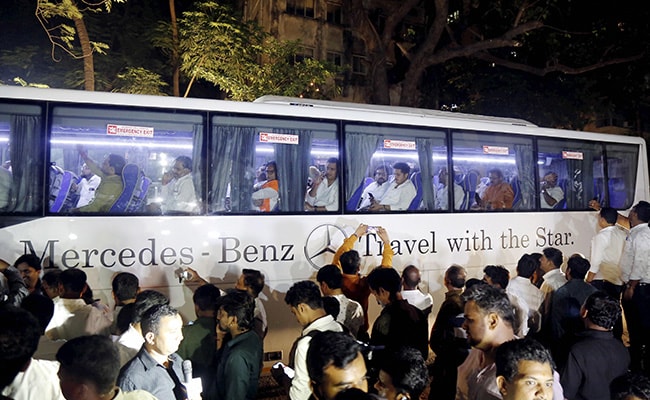 The NCP MLAs were taken to Renaissance Hotel in Mumbai's Powai in buses last night.

Mahrashtra's neighbouring state too is no stranger to what's popularly called "resort politics".  In the days after the Congress-JDS coalition fell, and after the BJP's BS Yediyurappa was invited to form the government and given 15 days to prove his majority, the Congress rushed its MLAs to a golf resort near Bengaluru.

The BJP made a deft political move with Mr Fadnavis taking oath as Chief Minister on Saturday morning with a deputy, Ajit Pawar, whose NCP had just hours before sealed a Shiv Sena-led alliance along with the Congress. Ajit Pawar's uncle Sharad Pawar said his party is still with the Shiv Sena and its chief Uddhav Thackeray.

The Supreme Court will today hear a petition filed by the Shiv Sena, Congress and Nationalist Congress Party against the centre's move to end President's Rule and the Governor's move to invite Devendra Fadnavis to form government.