According to the former Congress president, the girl wrote in the note, "Do not think you are walking alone, I am walking with you" 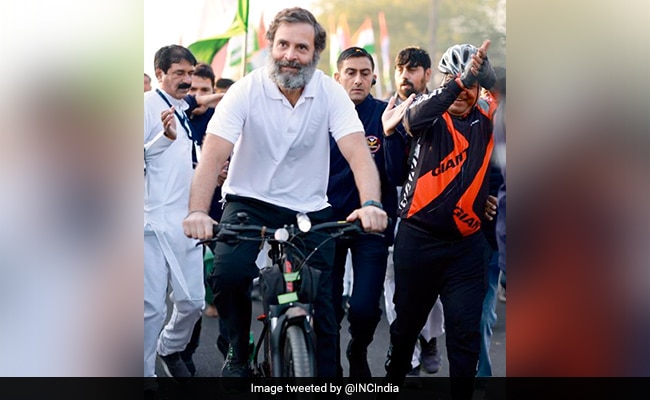 Rahul Gandhi is leading the Bharat Jodo Yatra, which is currently passing through Madhya Pradesh

Congress leader Rahul Gandhi, who is leading the Bharat Jodo Yatra, has shared his most memorable moment from the march.

In a video uploaded by the official Twitter handle of the Congress party, Rahul Gandhi talks about a girl who won his heart through a sweet gesture during the yatra.

Mr Gandhi begins by saying that he often advises his supporters to not jostle with each other and that he had sustained some injuries during the march due to it. He adds that while most ignore his advice, he once spotted a small girl, aged six or seven years, walking along him at a distance during the yatra. The girl, Mr Gandhi says, handed a note to him while suggesting that the leader open it later.

According to Mr Gandhi, the girl wrote in the note, “Do not think you are walking alone, I am walking with you. Although my parents are not allowing me to walk, I am still walking beside you.”

Recently, after the Bharat Jodo Yatra entered Madhya Pradesh, a boy named Yashraj Parmar gave his piggy bank to Rahul Gandhi for the yatra. The leader shared a video on Twitter where the boy is seen walking with Mr Gandhi and heard saying that he liked the leader as he took everyone along.

Mr Gandhi thanks and hugs the boy for his gesture in the clip.

“Sacrifice and selflessness are values inculcated during childhood. This piggy bank is priceless for me, a treasure of infinite love,” Mr Gandhi wrote.

Mr Gandhi, while interacting with people during a gathering in Madhya Pradesh, said that they are walking about eight hours to cover an average of 25km daily. He also emphasised that they listen for eight hours and speak for just 15 minutes.

The Bharat Jodo Yatra commenced on September 7 from Kanyakumari, Tamil Nadu, and will culminate in Srinagar. Those participating in the march will traverse through several states and Union Territories, covering 3,570km.