Senior Congress leader Abhishek Manu Singhvi called West Bengal Chief Minister Mamata Banerjee a "vital and indispensable" part of the anti-BJP space but refused to acknowledge her as the only opposition face. 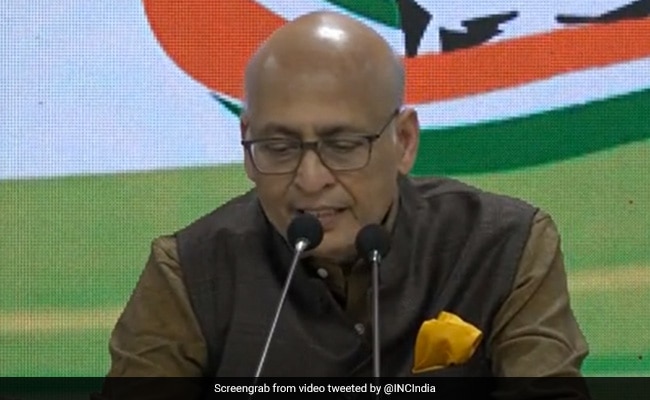 Senior Congress leader Abhishek Manu Singhvi has alleged that the BJP was creating "artificial issues" such as the debate over "Hindi as the national language" or hijab controversy to divide Indians and cautioned people against fighting amongst themselves "on the saffron party's terms".

Mr Singhvi, in an interview with PTI, called West Bengal Chief Minister Mamata Banerjee a "vital and indispensable" part of the anti-BJP space but refused to acknowledge her as the only opposition face.

On Congress-TMC relations, the Rajya Sabha member from West Bengal said that the Trinamool Congress's attack on the Congress was in the context of assembly elections in Goa and other states, and "we will have to wait for the whole thing to pan out for the 2024 Lok Sabha polls".

He said that reforms are needed in the Congress but it doesn't necessarily have to take place holding the hand of poll strategist Prashant Kishor, who did not join the grand old party after negotiations between the two sides failed.

"BJP is fishing in troubled waters, it is creating Frankenstein monsters...they want to divide, scare, provoke and antagonise people. Someday they bring up hijab, someday they find language. These are artificially created issues. They draw you into the debate because it suits them...don't fight on their terms," he said on the sidelines of the annual awards ceremony of the Ladies Study Group Charitable Trust in Kolkata on Saturday.

Union Home Minister Amit Shah's statement in April that Hindi should be accepted as an alternative to English and not to local languages evoked a controversy.

Presiding over the 37th Parliamentary Official Language Committee meeting in Delhi, Shah had said that Prime Minister Narendra Modi has decided that the medium of running the government is in the official language and this would definitely increase the importance of Hindi.

Mr Shah's statement has sparked a debate over whether Hindi is the national language or not, with several cine stars from Bollywood and southern film industries expressing their opinions on the matter.

Mr Singhvi, however, batted for the 1968 three-language formula first incorporated into the National Education Policy by the Indira Gandhi government.

"We have a three-language formula – English, Hindi and the local language. It has stood the test of time for the last 60 years. But the BJP is trying to destablise it as per their political gameplan," he said.

On Mamata Banerjee, Mr Singhvi said, "I have been repeatedly saying that Mamataji is a vital and indispensable part of the non-BJP space. But to say that she is the only opposition face, this exclusively monopolising approach is wrong. But nobody can deny she is a pillar of strength for the entire non-BJP space."

Noting that the TMC's approach of attacking the Congress and stressing on the importance of regional parties was limited to assembly elections in Goa and other states, he said, "We will have to wait for the whole thing to pan out for the 2024 general elections. Who knows what will happen then?" He said that the sooner all opposition parties realise that their strength lies in preventing a split in anti-BJP votes the better.

On Mamata Banerjee repeatedly calling for more space for regional parties in national politics in place of Congress, Mr Singhvi asserted, "It is very clear that no party can ignore or devalue Congress in any non-BJP formation. But we also need regional parties. Congress and regional parties must coalesce in the non-BJP space."

Mr Singhvi, who has recently been made the chairperson of Parliamentary Committee for Home Affairs, however, dismissed allegations of TMC having a "secret understanding" with the BJP.

"It is completely wrong and devoid of facts," he said.

On BJP demanding the imposition of President's Rule in West Bengal following the Birbhum killings and incidents of gangrape, the senior lawyer alleged that the saffron party was only playing politics.

"These are law and order situations, and any such incident is condemnable. The TMC government has taken strictest action and we demand stronger action but we don't support BJP's allegation that such incidents are state-sponsored. The BJP is only playing politics," he said.

"CBI inquiry has begun and we need to wait for results. Those found guilty will be punished. The TMC never said don't punish X or Y," he said.

Asked what went wrong during negotiations with Prashant Kishor who was scheduled to join Congress but later backed out, Mr Singhvi said there was a proposal and concrete issues were discussed.

"Some issues may not have suited X, some may not have suited Y. But there is no animosity or bitterness. I don't think it's fair to speculate on this in public or through the press. These are dialectics of exchanges which are confidential," he said.

Mr Singhvi, however, said that it was good that all pros and cons were made clear so that everyone could make an informed decision.

Asked about the necessity to rope in PK, the senior Congress leader said, "Reforms are needed in the Congress but it is not that only Prashant Kishor could have done it."

Prashant Kishor had last week declined to join the Congress, thanking the party but also asking it to show "collective leadership".