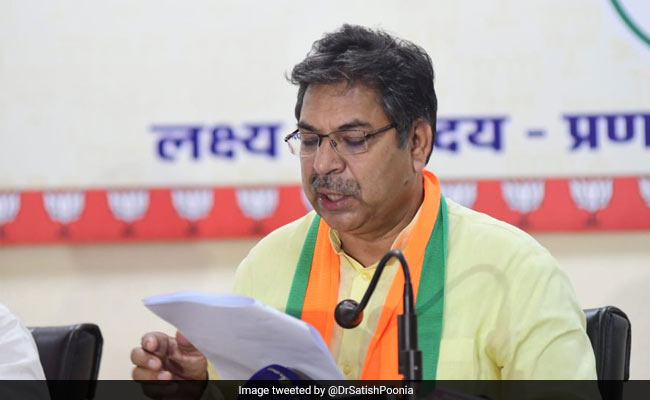 What is happening in the Congress today is a result of infighting, Satish Poonia said (File)

The Congress government in Rajasthan should go as it has lost the confidence of people, the BJP said on Monday amid a tussle for power in the ruling party.

Rajasthan Deputy CM Sachin Pilot has declared open rebellion against Chief Minister Ashok Gehlot and claimed that the government is in minority as he has the support of over 30 MLAs in the 200-member Assembly.

Asked about speculations that the BJP may support the Pilot camp from outside, party state president Satish Poonia said that "we have all options open" and a decision would be taken based on how the situation evolve and as per the directions of the central leadership.

Mr Poonia said that young leaders have always been "neglected and side-lined" in the Congress. Pilot had worked for five years to strengthen the Congress but he was neglected, Mr Poonia added.

What is happening in the Congress today is a result of infighting, the BJP leader said.

"The Congress government has lost people's confidence. It should go in public interest. The government failed to keep its promises made to people," Mr Poonia told reporters.

On the developments in the ruling party, the state BJP president, who is also an MLA, said that many things were still under a veil and have not come out yet.

Congress MLAs on Monday holed themselves up in a resort near Jaipur after a legislature party meeting, where they expressed support for Rajasthan Chief Minister Ashok Gehlot and only indirectly referred to Sachin Pilot, whose rebellion threatens his government.

A resolution adopted at the Congress Legislature Party meeting urged "strong disciplinary action" against any party office-bearer or CLP member who does anything to weaken the government or the party.

Mr Poonia also alleged that government machinery, from collectors to peon, has engaged in saving the government instead of dealing with the coronavirus crisis.

On income tax raids on the premises linked to Congress leaders, Mr Poonia said that it could be a coincidence because conducting such actions require exercise in advance.