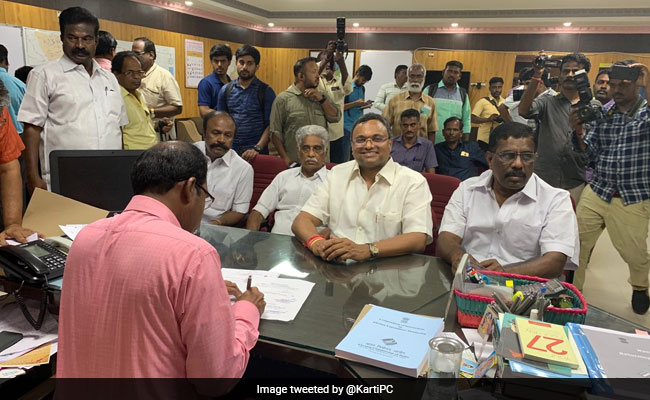 The Congress leader and his father are fighting a court battle after being charged by the CBI and Enforcement Directorate in cases related to alleged irregularities in grant of Foreign Investment Promotion Board (FIPB) approval in the Aircel-Maxis deal.

"I am deeply honoured that our party has decided to field me as its candidate in the Sivaganga constituency. Grateful to the Congress President Rahul Gandhi and the AICC for giving me this opportunity...", Chidambaram junior said in a tweet, and added that the "strength of the party and the alliance" will help him win the Sivaganga seat.

He will be pitted against H Raja, the BJP national secretary, known for his several controversial remarks after Lenin's statue was vandalised in Tripura. He was also summoned by the Madras High Court after a video of him calling the state police 'anti-Hindu', and 'corrupt' went viral last September. He however claimed that the video was doctored.

Karti Chidambaram's candidature was keenly contested by former union minister EM Sudarshana Nachiappan, who is now upset over the party's central committee decision. "The cadres from the constituency are disappointed. His (Karti Chidambaram) family has done nothing for the constituency, instead they have accumulated wealth. This could damage Congress' reputation," said Mr Nachiappan.

Karti had lost in Sivaganga in 2014, a constituency held by P Chidambaram since 1984. Karti landed fourth after the AIADMK, DMK and the BJP.

The state votes for 18 assembly and 39 Lok Sabha seats in the second phase on April 18. The results will be declared with the rest of the country on May 23.