During the campaign, MK Stalin sought votes for DMK candidate Poondi Kalaivanan, for the by-election in Tiruvarur constituency. 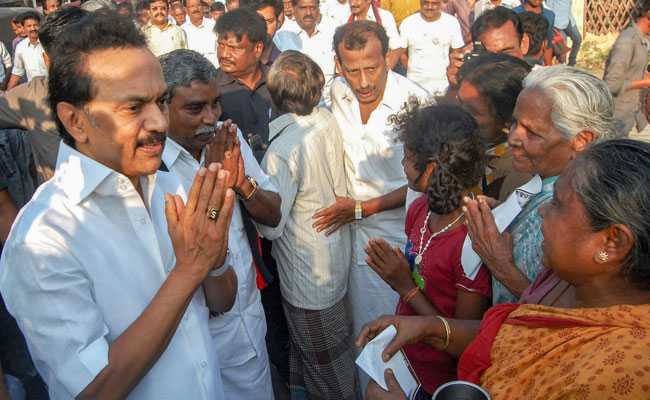 A day after releasing his party's manifesto for the Lok Sabha elections, DMK President MK Stalin on Wednesday launched his campaign from father M Karunanidhi's birthplace Tiruvarur. Addressing a rally, the DMK leader said that Prime Minister Narendra Modi's tenure will end on June 3 - which also happens to be M Karunanidhi's birth anniversary.

Invoking his father's legacy, the DMK leader assured voters that promises made to them before the elections will be fulfilled. "Thalaivar Kalaignar implemented what he promised during polls. Free electricity for the farmers was one of the promises that he fulfilled," he was quoted as saying by news agency PTI.

During the campaign, MK Stalin sought votes for DMK candidate Poondi Kalaivanan, for the by-election in Tiruvarur constituency. The seat fell vacant after the death of M Karunanidhi and CPI's Lok Sabha candidate from Nagapattinam constituency.

The DMK leader hit out at PM Modi for what he called his "fascist rule" using lies to come to power.

"Did he fulfill at least one of his promises? Did he bring back black money or provide the two crore jobs that he assured?" he asked. MK Stalin also slammed the Prime Minister for claiming to root out corruption with Tamil Nadu Chief Minsiter K Palaniswami's help. "K Palaniswami is himself running a corrupt government. Is PM going to align with him," he asked.

This will be Tamil Nadu's first national election after the death of two iconic  figures--J Jayalalithaa and M Karunanidhi. The Congress and the DMK have formed an alliance ahead of the elections. The Congress is to contest on nine of the state's 39 Lok Sabha seats and the oneseat in Puducherry.