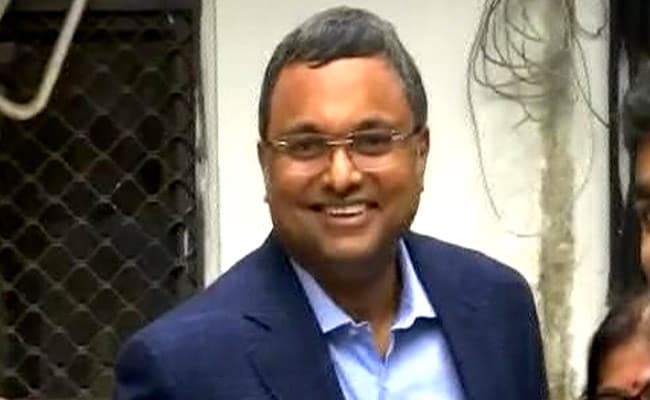 The Supreme Court on Friday declined the request of Karti Chidambaram that the Rs 10 crore, which he was asked to deposit as security for travelling abroad, be kept as an interest-bearing short term deposit by the top court registry.

He was also asked to appear before Enforcement Directorate (ED) for quizzing in INX Media and Aircel Maxis cases.

A bench of Chief Justice Ranjan Gogoi and Justice Sanjiv Khanna was on Friday requested by the counsel for Karti that the security money be kept as the "short term deposit", which would bear interests, for a three month period and the money be allowed to be withdrawn by him on his return from abroad.

The bench declined the plea and said, "If you are asking for such a condition then next time, when he will seek permission to travel abroad, we will have to think."

Earlier, the top court allowed the plea of Karti to go abroad and asked him to cooperate in the probe by the ED.

Karti Chidambaram has sought permission to travel abroad twice from February 10 to 26 and again from March 23 to 31.

He had sought the court's nod to travel to France, Spain, Germany and the United Kingdom for international tennis tournaments organised by "Totus Tennis Ltd".

The plea has said that Karti Chidambaram is associated with tennis as a "former player, current administrator and entrepreneur".

The probe agency had earlier opposed the plea of Karti seeking permission to travel abroad, and said that he has been evasive, non-cooperative and caused delay in completing the investigations.

Karti was abroad for 51 days in last 6 months, the probe agency has said.

On September 18 last year it had allowed Karti to travel to the UK from September 20-30.

Karti Chidambaram is facing criminal cases which are being probed by the ED and the CBI.

One of the cases relates to the FIPB clearance to INX Media for receiving foreign funds of Rs 305 crore when his father was the finance minister.

The ED has said that Karti, who is also facing proceedings in cases like Aircel-Maxis and money laundering matters, has been "blatantly misusing" the liberty granted by court in allowing him to travel abroad and has been using the same to protract the investigation in the case.