Congrats to Him: PM Modi's Message for Dr Manmohan Singh 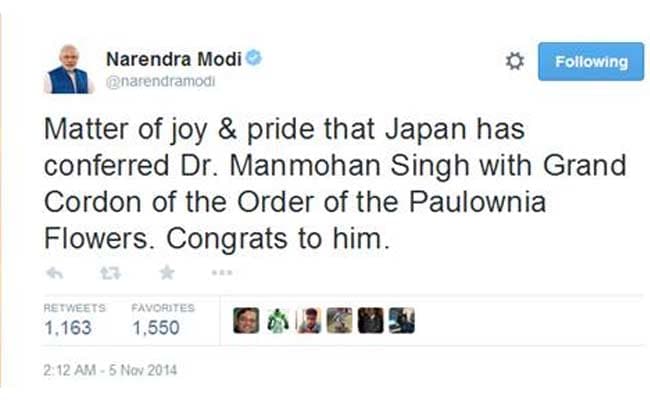 "Matter of joy & pride that Japan has conferred Dr. Manmohan Singh with Grand Cordon of the Order of the Paulownia Flowers. Congrats to him," the Prime Minister tweeted.

Matter of joy & pride that Japan has conferred Dr. Manmohan Singh with Grand Cordon of the Order of the Paulownia Flowers. Congrats to him.

Dr Singh, 82, is the first Indian to receive the award. He was presented the award, by Japanese Emperor Akihito today for his "significant contribution to the enhancement of relations and promotion of friendship" between Japan and India for about 35 years.

Emperor Akihito and Empress Michiko hosted lunch for Dr Singh and his wife Gursharan at the Imperial Palace after the award ceremony, Kyodo News Agency reported.

Dr Singh is among 57 foreign recipients named for the 2014 Autumn Imperial Decorations.

He had earlier said that he was truly honoured and that it had been his dream to see the India-Japan relationship grow and prosper. Dr Singh was India's Prime Minister for 10 years.

Promoted
Listen to the latest songs, only on JioSaavn.com
Mr Modi, who took over as Prime Minster in May this year, visited Japan three months ago and has stressed on the importance he lays on India's relationship with that country.