"That's not our focus. Our focus is that Afghan soil should not be used for anti-India activities and terrorism of any kind," MEA spokesperson Arindam Bagchi said at his weekly briefing. 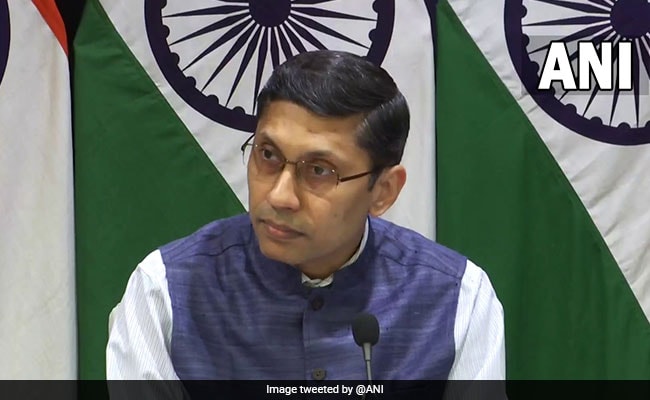 India's immediate focus in Afghanistan is to ensure that Afghan soil is not used for terrorist activities against it and it was still "very early days" to talk about any possible recognition to the Taliban, the external affairs ministry said on Thursday.

"That's not our focus. Our focus is that Afghan soil should not be used for anti-India activities and terrorism of any kind," MEA spokesperson Arindam Bagchi said at his weekly briefing when asked about India''s engagement with the Taliban and whether it is not a terrorist organisation.

Two days after the Indian envoy to Qatar held talks with a senior Taliban leader in Doha, Mr Bagchi faced a volley of questions on whether India was ready to recognise a Taliban regime in the backdrop of the Doha meeting and India's future plans regarding the engagement with the Taliban.

Asserting that it was too early to talk about it, the spokesperson said, "let's treat the Doha meeting for what it is. It was just a meeting. I think these are very early days."

"We used the opportunity to convey our concerns whether it is in getting people out (from Afghanistan) or on the issue of terrorism. We received a positive response," he said.

On Tuesday, the MEA said Indian envoy to Qatar Deepak Mittal met Sher Mohammad Abbas Stanekzai, the head of the Taliban's Political Office in Doha, at the request of the group.

In the meeting, Mr Mittal conveyed to Mr Stanekzai that Afghanistan's soil should not be used for anti-Indian activities and terrorism.

It was the first publicly acknowledged formal diplomatic engagement that came two weeks after the Taliban seized control of Afghanistan.

When pressed further on whether India will have more meetings with the Taliban, Mr Bagchi said he does not have any update to share and that he does want to speculate.

Asked about the possible roadmap of engagement with the Taliban, the MEA spokesperson added: "It is not a yes or no question. We would not have done anything without thinking."

"Our primary immediate concern is that Afghan soil should not be used for anti-India activities and for terrorism against India. Our focus is this. Let's see what happens," he said.

When asked about reports of the formation of an inclusive government in Kabul and whether India has been invited for the inauguration of the new dispensation, Mr Bagchi said: "I have no update on either issue."

"I do not have any details that I can share with you regarding the nature of the government that could be formed in Afghanistan."

There have been mounting concerns in India over the possibility of rise in activities of various terror groups including Lashkar-e-Taiba and Jaish-e-Mohammed from Taliban-controlled Afghanistan.

To a question on the Taliban not commenting on the Doha meeting, Mr Bagchi said it is up to the outfit.

When asked why there was no photo of the meeting or whether the Taliban did not want it, Mr Bagchi said: "It was just a meeting. It was not really that kind of an event where photos are taken. I do not think there is any thought behind it that we do not have a photo of it."

On why the Taliban requested the Doha meeting, Mr Bagchi said he presumed the group wanted to reach out to all the countries who have interest and relevance to Afghanistan.

On bringing back the remaining Indians from Afghanistan, he said India will be able to revisit the matter once the Kabul airport resumes operation.

"We have been prioritising the evacuation of our nationals as well as some Afghans. Currently, the Kabul airport is not operational. I think we will be able to revisit the issue once the operations at Kabul airport resume," Mr Bagchi said. Asked about the number of Afghans who were issued e-Visa since August 16, Mr Bagchi said the database of it is with the Home Ministry as it handles the matter. To another query on whether India is working on a refugee policy for Afghans, the spokesperson said the matter comes under the home ministry. Mr Bagchi said India always wanted peace and security in Afghanistan.