Citizenship Amendment Act or CAA, which promises citizenship to refugees who came to India before 2014 from Pakistan, Afghanistan and Bangladesh but not if they are Muslims, has triggered massive protests across the country.

The Citizenship Amendment Act or CAA, which promises citizenship to only non-Muslim refugees from three neighbouring countries, came into effect on Friday, an official notification from the Home Ministry said. The controversial law, that makes religion a criteria for citizenship for the first time in India, has triggered massive protests across the country.

"In exercise of the powers conferred by sub-section (2) of the section 1 of the Citizenship (Amendment) Act, 2019 (47 of 2019), the Central Government hereby appoints the 10th day of January, 2020, as the date on which the provisions of the said Act shall come into force," the notification said.

Passed by parliament on December 11, the CAA says that members of Hindu, Sikh, Buddhist, Jain, Parsi and Christian communities who have come from Pakistan, Bangladesh and Afghanistan till December 31, 2014 facing religious persecution there will not be treated as illegal immigrants but given Indian citizenship. The Home Ministry, however, is yet to frame the rules for implementing the act. 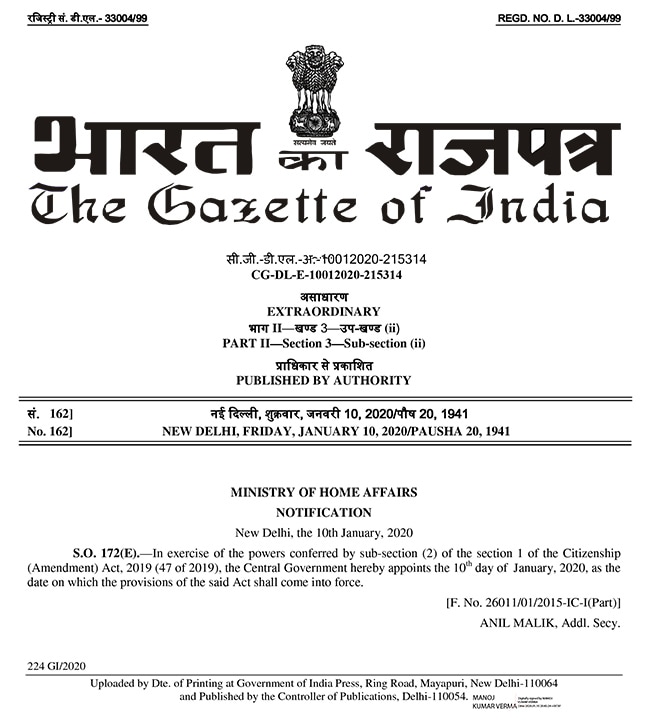 The CAA notification was issued by the Home Minstry.

Those who are opposed to the legislation say that it is for the first time that India will grant citizenship on the basis of religion which violates the basic tenets of the country's constitution. They say the citizenship law is a precursor to a national register that many Muslims fear will leave them stateless. Many of the poor in the country do not have documents to prove their nationality.

According to news agency AFP, at least 25 people have died and hundreds have been detained so far in protests over the CAA during which police have been accused of using excessive force.Tens of thousands of people have participated in the protests across India against the CAA.

The government and the ruling BJP have been defending the act saying that minority groups from the three countries have no other option but to come India when they face religious persecution there.

The law will benefit approximately five lakh Hindus who have been exempted from the National Register of Citizens or NRC in Assam, government sources say. It will also help more than 31,000 people who have sought amnesty in India on grounds of religious persecution and have been given long-term visas, according to the Home Ministry.