China Regional Bully At Doklam But We Stood Up To It: Army Vice Chief Designate

Speakingin Kolkata on his last day as the General Officer Commanding-in-Chief, Eastern Command, General Naravane said China must realise the Indian Army is not what it was during the Sino-Indian war of 1962. 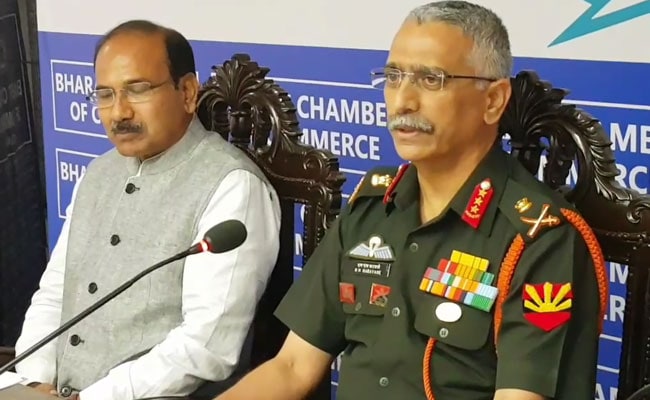 Army vice-chief designate Lieutenant General MM Naravane has called China a "regional bully" but, he added, if China transgressed the "grey zone" at the Line of Actual Control (LAC) a 100 times, the Indian Army did so on 200 occasions during the Doklam stand-off in 2017.

Speaking in Kolkata on his last day as the General Officer Commanding-in-Chief, Eastern Command, General Naravane said China must realise the Indian Army is not what it was during the Sino-Indian war of 1962.

"The Doklam stand-off gave a clear signal that the Indian Armed forces are no pushovers," he said, adding, "They thought that they would get away by being a regional bully... but we stood up to the bully," he said.

The Lieutenant General was speaking at a discussion titled "Defending Our Borders", hosted by the Bharat Chamber of Commerce where he answered questions from former Air Chief Air Marshal Arup Raha and Sitaram Sharma, the chamber's president.

Commenting on reports suggesting "some developments" at Doklam after the stand-off, he said, "That (the reports) is also not totally incorrect. There have been developments on either side... which have been throughout the year, year on year. They have made two new barracks, we have also made two new barracks. They have maintained their roads, we have also maintained our roads."

Replying to a question by former Air Chief Air Marshal Raha that transgressions at the LAC by China have increased, Lieutenant General Naravane said, "If we say that he (China) is coming into the grey zone 100 times, then we have gone in the grey zone 200 times. So, let us not think it is one-way. I am sure in their war room they are also complaining that we have done this so many times."

The Lieutenant General said despite the transgressions, the armies of both countries have mutually agreed not to raise each other's hackles as long as the red line is not breached.

Speaking about the 1962 war, the Eastern Army Commander said it was not a military but a political debacle for India as all army units fought well.

"Where they (Indian Army units) were told to stand and fight, they acquitted themselves with great honour. So, I do not see 1962 as a black mark on the Army at all and the armed forces... but we have learnt our lessons on what went wrong. And over the years we have been trying to bridge that capability gap. It is not easy to overcome these gaps in a short time frame, we have budgetary constraints," he said.

When asked about an article published in a Chinese newspaper that the country would have to fight six wars by 2050, including one against India over Arunachal Pradesh, which it claims as its own territory, Lieutenant General Naravane said, "It is quite a tall task they have set for themselves."

He, however, said by 2049, the 100th year of the Communist Party of China, Beijing would "definitely want to achieve something".

Lieutenant General Naravane said China may try to achieve the goals mentioned in the article published by a semi-official think tank not through war but by "indirect means".

By indirect means, Lieutenant General Naravane said, he meant that China could try to get the people of places it has set its sights on to claim they wanted to become part of that country.

The article said China is sure to fight six wars to reclaim what it believes are its territories it lost since Imperial China was defeated by the British in the Opium War of 1840-42.