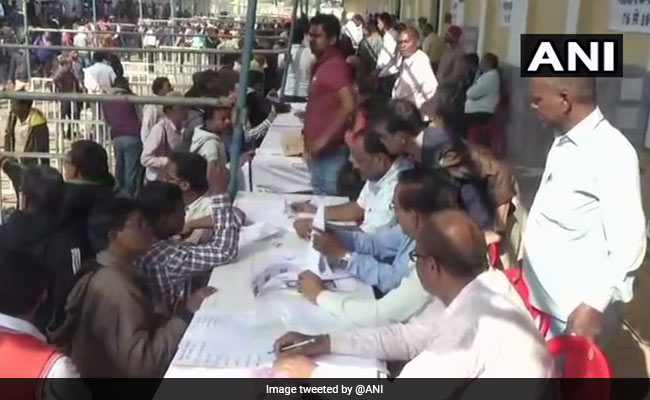 Chhattisgarh Assembly Election 2018: Polling preparations are underway in the state.

Eighteen of 90 constituencies in Chhattisgarh will go to polls tomorrow, November 12, under the shadow of Maoist threats. As many as one lakh security personnel, including paramilitary forces, have been posted in the constituencies that will vote tomorrow. A total of 190 candidates are contesting the Chhattisgarh assembly elections in the 18 constituencies in Chhattisgarh spread over eight districts which are active Maoist regions. Seven districts of the Maoist-affected Bastar region and the Rajnandgaon district will vote tomorrow. A total of 4,336 polling booths have been set up for the first phase of the Chhattisgarh assembly elections. There are 31,79,520 voters, including 16,21,839 males, 15,57,592 females and 89 of the third gender.

Voting for the Chhattisgarh assembly elections will take place from 7 am to 3 pm in some areas and 8 to 5 pm in others. Ten out of the 18 seats will vote from 7 am till 3 pm tomorrow. These seats are Mohla-Manpur, Antagarh, Bhanupratappur, Kanker, Keshkal, Kondagaon, Narayanpur, Dantewada, Bijapur and Konta. In districts including Khairagarh, Dongargarh, Khuji, Rajnandgaon, Dongargaon, Bastar, Jagdalpur and Chitrakot, voting will take place between 8am to 5pm.

Security has been stepped up for the polling as Maoists have asked people to boycott the Chhattisgarh assembly elections. More than 12 helicopters will be available to reach polling booths in highly sensitive regions. For over two dozen booths, polling parties will be ferried via bikes, boats or on foot.

Maoists have triggered several attacks in the last few days in the region in Chhattisgarh killing several people, including a BSF trooper today.

The assembly elections in five states, which are being perceived as a "semi-final" before the Lok Sabha polls in 2019, saw intense campaigning by both the Congress and the BJP in Chhattisgarh, the former desperate to end the 15-year rule of the BJP. The campaign which ended yesterday witnessed Prime Minister Narendra Modi, party chief Amit Shah and Uttar Pradesh Chief Minister Yogi Adityanath raising the pitch for the BJP. Meanwhile, Congress President Rahul Gandhi attacked the BJP government over corruption, agrarian distress and unemployment.

The second phase of the Chhattisgarh assembly election will be held on November 20 and the votes will be counted on December 11 along with that of of Mizoram, Madhya Pradesh, Telangana and Rajasthan where assembly polls will be held over the coming weeks.