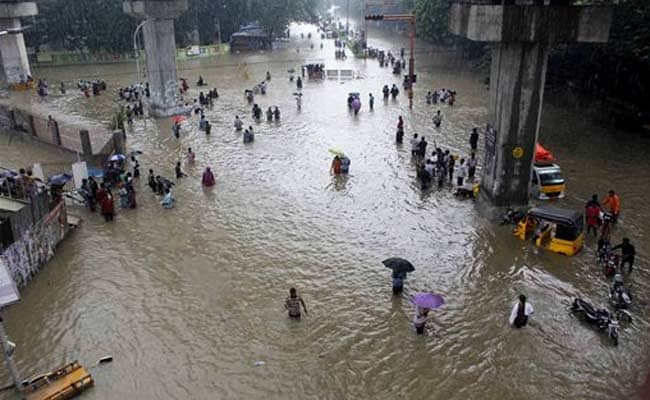 Road traffic chaos in Chennai, after flooding in most of the city due to rain

New Delhi: Terming the situation in flood-hit Chennai as "very alarming", Home Minister Rajnath Singh today said in the Lok Sabha that the Centre will extend all possible assistance to the state governments in dealing with natural calamities.

"It would not be an exaggeration to say that Chennai has become an island as it has been cut off from all national and state highways," he said, responding to a discussion on the flood situation in Tamil Nadu, Puducherry and Andhra Pradesh.

Sharing concern of members on the magnitude of the calamity, he said the megapolis was witnessing an unprecedented emergency situation with unrelenting rains which was a record in the last 100 years.

He said in the 24 hours ending 8.30 am of December 2, Chennai received 330 mm of rain when the fact is that in the whole of December it generally gets 250 mm.

As many as 269 people have died in Tamil Nadu due to the torrential rains, while two in Puducherry and 54 in Andhra Pradesh.

Detailing the help being provided by the government for the rescue and relief operation, the Home Minister said 12 boats of Navy along with 155 personnel have also been pressed into service.

He said IAF is also helping in the effort by deploying 14 teams of NDRF. He said while the state government had sought Rs 8,481 crore as central assistance, the Centre has provided Rs 940.92 crore.

He said further assistance will be given after the receipt of the report of the central team expected this week.

Mr Singh said Prime Minister Narendra Modi and he himself had spoken to the Tamil Nadu Chief Minister while he also spoke to Andhra Pradesh as well as Puducherry Chief Ministers.

He said Andhra Pradesh had sought Rs 1,000 crore as interim relief and soon a central team will visit the state.

When he said West Bengal is being provided Rs 387 crore, it angered the TMC members who staged a walk out after their leader Sudip Bandopadhyay expressed dissatisfaction over the manner in which such assistance was being arrived at.

BJD leaders B Mahtab and Tathagata Satpathy also expressed dissatisfaction over Rs 280 crore allotted to Odisha which had suffered from cyclone.