In Rain-Hit Chennai, An Air Bridge To Aid Rescue Ops

People travel on a boat as they move to safer places through a flooded road in Chennai. (Reuters Photo)

Chennai: The INS Rajali, a naval air station in Arakonnam, about 70 km from Chennai, will serve not just as make-shift airport for commercial flights, but also the base for large Air Force rescue planes to land.

The Indian Air Force, which rescued 22 people yesterday, is trying to build an air bridge between Chennai and the base, which means that small groups of people rescued from the flooded Tamil Nadu capital will be flown by helicopter to Arakonnam and then bigger groups will fly out in the large IAF transporters the C-17s.

The air force base at Tamabram, about 20 km from Chennai, does not have a big enough landing strip for the C-17s, said a senior IAF officer. The Rajali base has the biggest military runway in Asia.

With many parts of Chennai flooded after record rain and water on the runway, the city's airport has been closed for operations till Sunday, December 6. No flight has taken off or landed at the Chennai airport since Tuesday evening.

National carrier Air India test-landed an Airbus 320 that flew in from Hyderabad at the Rajali Naval base on Wednesday evening and more passenger flights are expected to operate from there today. 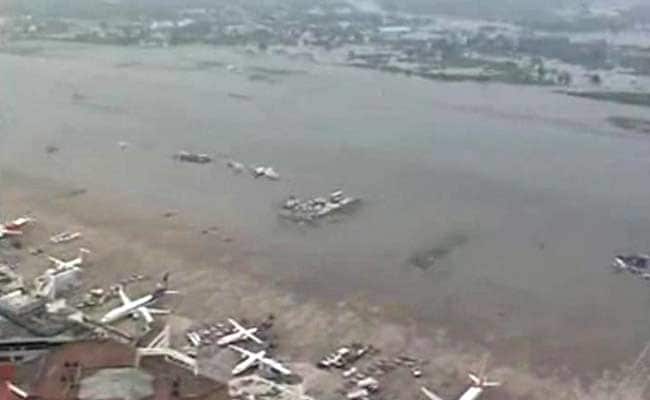 Aerial shot of flooded Chennai airport that has been closed till Sunday, December 6.

"By 6 am today, the situation had deteriorated severely, leading to submerging of entire operational area in approximately seven feet of water. All incoming flights were diverted to alternate airfields, except one international flight which was cleared due medical priority," said a statement by the government on Wednesday.

"During the closure, 12 domestic and 12 international arrivals were diverted on 1st December 2015. 34 numbers of aircrafts are stranded at the airport. All international and domestic flights to and from Chennai have been cancelled," it added.

90 passengers who were stranded at the airport were sent to Bangalore by bus and another 200 have been transferred to the city, the statement said.

The weather department has forecast more rain in the next four days and said that the next 48 hours are critical.

50 trains have also been cancelled, with water flooding rail tracks.