Fearing an influx of what they are terming as National Register of Citizens (NRC) rejects from Assam into Meghalaya, the Khasi Students' Union (KSU) set up check points along the highway and border to keep "illegal migrants" away. Travellers from across the border are being stopped and asked about their citizenship status by KSU activists.

Over 40 lakh people found their names missing from the final draft of the NRC released on July 30. The register separates Indian citizens in Assam from those defined as "illegal immigrants".

The next day, "check gates" came up at several places in Meghalaya's East Jaintia Hills district, West Khasi Hills district and Ri-Bhoi district. They continued "checking" vehicles for two days, but have reportedly stopped the process today. Other Northeastern states such as Nagaland and Arunachal Pradesh have also intensified their border vigil.

The Manipur government said it has set up state-level and district-level committees to check entry of illegal immigrants.

"The union is apprehensive about the spillover. We have often apprehended numerous illegal immigrants who tried to infiltrate through porous border. There will be a spill over after the NRC so we decided to set up check gates to prevent the influx of migrants," General Secretary of Khasi Students Union Donald Thabah said.

Meghalaya Chief Minister Conrad Sangma said that the union is concerned about the issue, "so they did what they thought they should do". "But it isn't appropriate for any non-government agency to involve in this process. The government has taken steps to check immigration. We have set up check points at different locations, and I have been personally monitoring it. All top police officials in vulnerable districts have been asked to stay alert," Mr Sangma said. 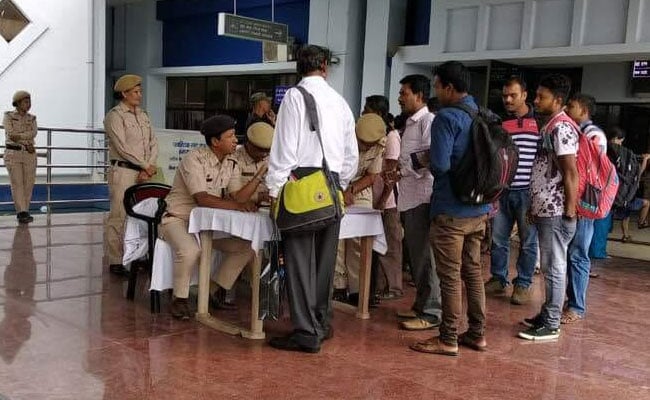 The authorities check papers of people arriving at Imphal airport

Sushmita Dev, Silchar MP from Assam, wrote to Home Minister Rajnath Singh pointing out that since the publication of the NRC, the Meghalaya Police, with the help of the Khasi Students' Union, were stopping people from Cachar district from entering Meghalaya. The Congress leader also accused the students of beating up travellers.

"It's creating an environment of fear and infringing on their freedom of movement," she said in her letter.

Assam's citizens' list, aimed at identifying illegal immigrants from Bangladesh, has triggered similar demands from across the country, especially Northeastern states where pressure groups and regional political parties are pressing for an NRC exercise.

Manoj Tiwari, the Delhi BJP chief on Wednesday asked the centre to start work on building a citizenship register for the national capital to identify and expel "foreign infiltrators".

BJP legislator Raj Purohit has demanded that Bangladeshis in Mumbai, especially those in Colaba, his constituency, be identified and sent back to their own conutry.

The Bengal BJP chief Dilip Ghosh has promised a similar drive in Bengal once it comes to power. In Rajasthan, home minister Gulab Chand Kataria wants other states to come forward to introduce the citizens' list so that "the traitors living freely can be traced".

The opposition parties including Mamata Banerjee's Trinamool Congress, however, are accusing the BJP of trying to drive out people for political reasons.

The Congress claims that the debate over the poorly-implemented NRC was being given a religious undertone. "Why we are concerned is because of the kind of polarizing politics that is being played," Congress' Pawan Khera said.