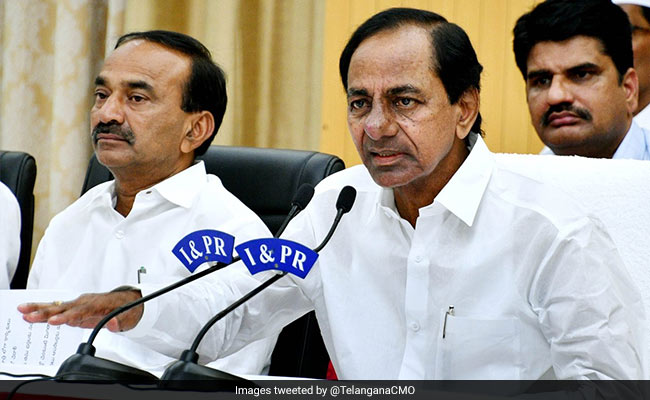 Telangana Chief Minister K Chandrasekhar Rao has urged Prime Minister Narendra Modi to drop the proposal asking the states to go for borrowing to meet the shortfall in the GST compensation and said the Centre can itself take up the entire financing.

In a letter to PM Modi, he also claimed the Centre has taken a unilateral decision to lower the threshold limit of 14 per cent for working out GST compensation to ten per cent, terming it as a matter of grave concern.

He underlined the need for strengthening cooperative federalism in this crisis situation posed by the COVID-19 pandemic.

Taking into account the compelling reasons mentioned above, it is my earnest request that the decision of asking the states to meet the shortfall in the compensation through borrowings may be reversed, Mr Rao said.

As an alternative, the Centre can borrow the entire shortfall amount based on the strength of the receipts into cess amount and the entire debt servicing both principal and interest -- can be paid from the cess collected for such an extended period beyond 2022, as the GST council may decide, he added.

Suggesting states to borrow money to make up for the shortfall at the GST Council meeting, the finance ministry recently wrote to state governments saying they could borrow either via a special window it will facilitate through the RBI or raise debt from the market.

Some non-BJP ruling states have objected to the proposal of borrowing and insisted that the Centre has the obligation to compensate the states as per the GST Act.

In April, 2020 Telangana suffered a revenue loss of 83 per cent whereas COVID-19 pandemic related expenditure has increased leaving the state with a difficult task of meeting the expenditure through front loading of market borrowings, resorting to ways and means advances and overdrafts.

According to the chief minister, states are made to depend on the Union Government even to go for market borrowings.

It also a matter of grave concern to states that the Centre has taken a unilateral decision to apply 10 per cent growth rate to arrive at the gap in GST revenue for the year 2020-21, Mr Rao said.

The states have yielded more fiscal space to facilitate the introduction of GST which had subsumed over 47 per cent of the gross tax revenue of the states as compared to only 31 per cent of the Centre's.

He said the Centre had garnered additional revenue of Rs 2 lakh crore by increasing cess on petroleum products which pre-empted the states from increasing the VAT on petrol and diesel.

Mr Rao said the states need more resources from the centre as they are in the forefront of fighting COVID-19 pandemic and reviving the stalled economic activities.

"There is an imperative to strengthen cooperative federalism in this crisis situation so that the nation not only overcomes it but emerges stronger," he added.