The CBI filed a chargesheet against four police officials of Haryana for allegedly framing a bus conductor in the killing of a seven-year-old student of a private school in Gurugram in September 2017. 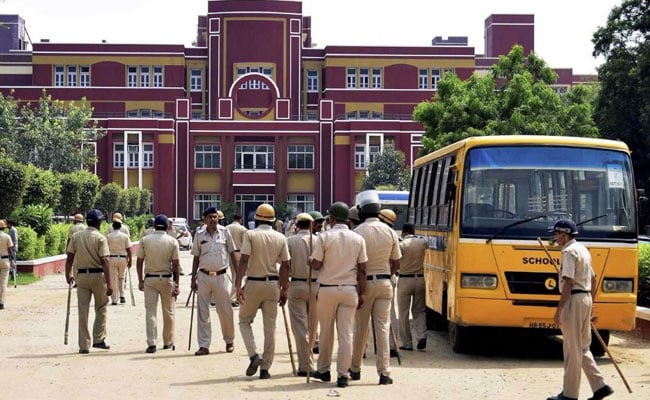 The student was killed on September 8 allegedly by a senior student. (File)

After nearly three years of probe, the Central Bureau of Investigation (CBI) has filed a charge sheet against four police officials of Haryana for allegedly framing a bus conductor in the killing of a seven-year-old student of a private school in Gurugram in September 2017, officials said on Friday.

The student was killed on September 8 allegedly by a senior student.

The CBI filed its supplementary charge sheet in the case, commonly known as the Ryan murder case, before a special CBI court in Panchkula against the then SHO of Bhondsi police station Narender Singh Khatana, Sub-Inspector Shamsher Singh, ASI Subhash Chand and ACP (Sohna) Barem Singh.

They were charged under IPC sections 120-B (criminal conspiracy), 166A (disobeying directions under law), 167 (Public servant framing an incorrect document with intent to cause injury), 330 (Police officer torturing someone to confess a crime) and 506 (criminal intimidation), officials said.

A Class 2 student, named Prince by the court to protect his identity, was found near the toilet of the school with his throat slit on September 8 morning within an hour of his father leaving him at the school.

The local police had arrested bus conductor Ashok Kumar of the school and shown recovery of a knife from him claiming it to be the murder weapon.

The police had claimed solving the heinous crime quickly and put the blame on the conductor who was also paraded before the media by senior officials of Gurugram police.

In a twist to the case, the CBI debunked the claims of police and found the conductor to be innocent.

The agency in its meticulous probe examined teachers, students, and scanned local markets which led them to a Class 11 student of the school, named Master Bholu by the court to protect his identity.

The juvenile was apprehended in the murder of the eight-year-old student on November 7, 2017, CBI spokesperson RC Joshi said.

"It was revealed during CBI investigation that the conductor earlier arrested by Gurugram Police was not involved in this murder case. Further investigation of the case was continued. During further investigation, the alleged role of said police officials came to light and supplementary charge sheet was therefore filed against them," he said.

According to the agency, the Class 11 student, believed to be weak in his studies, allegedly slit the victim's throat to get the school to declare a holiday in order to defer a scheduled parent-teacher meeting (PTM) and an examination.

The accused is facing murder trial as the CBI kept investigating the role of police personnel in framing Kumar.