Class 10 CBSE results 2017 have been declared. Check your results at @cbseresults.nic.in, @cbse.nic.in, Bing.com 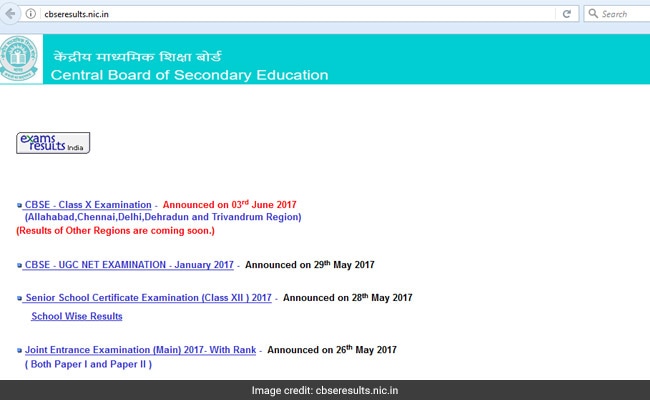 New Delhi: Class 10 CBSE results 2017, are now out. Minutes before CBSE Results website Cbse.nic.in has crashed, leaving lakhs of students and parents perplexed. Central Board of Secondary Education (CBSE) is expected to release the Class X results 2017 anytime now. The results can be viewed at Microsoft's bing.com, cbseresults.nic.in and examresults.net. The results are expected to be declared at 12 pm. The Board had earlier announced that the results will be declared around 'forenoon'. More than 16 lakh students appeared for the CBSE Class x boards this year.

Meanwhile, CBSE has opened the counselling telephone lines for Class 12 and Class 10 students, in an effort to help combat post-result distress and helping them choose the future course of action.

1. Visit the following websites to check your results-2. Click on Class X (10) results link
3. Now, please enter your CBSE roll number and also the school number
4. CBSE Class X results 2017 will be displayed on the screen
5. The CBSE Class 10 results can viewed via SMS, which will charged at 50 Paise per SMS.
6. Candidates can also view their results via CBSE's IVR system, charged at 30p per minute per roll number.
7. DigiLocker account too will consist your CBSE Class 10 result marksheets

Promoted
Listen to the latest songs, only on JioSaavn.com
The results have come after a controversy over the moderation policy of the board. In April, the board had decided to scrap the moderation policy, which elicited a court intervention advising against the scrapping, reported news agency IANS.

Meanwhile, anxious candidates took to Twitter, asking when will the results be declared:

@PrakashJavdekar when will the cbse results for class x be declared.? Anxious candidate here.