Read inOther Languages
This Article is From Sep 12, 2018

One of the policemen, head constable Umesh Babu, who was seriously injured and referred to Delhi for treatment passed away this morning. The other policeman has been admitted in a hospital in Gwalior. 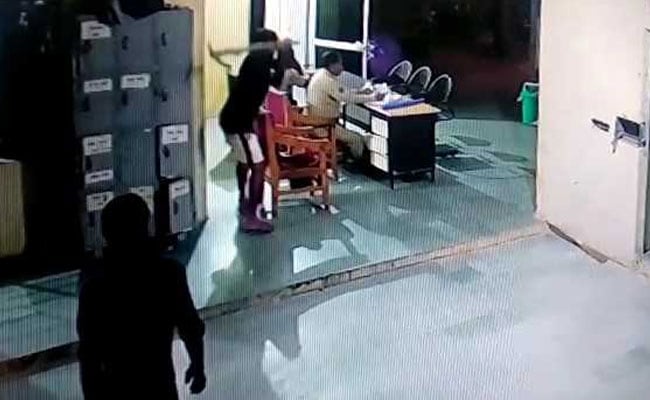 The daring escape, caught on camera, shows the man, armed with a spade, moving quietly down a corridor.

A man, arrested for violating peace, caused mayhem inside a police station in Madhya Pradesh on Sunday. Knocking two policemen at the station unconscious, he managed to escape with his accomplice, but was caught several hours later.

The daring escape, caught on camera, shows the man, armed with a pickaxe, moving quietly down a corridor and hitting the policemen on the head from behind. The two, sitting at a table, were caught unawares. The first man immediately collapses. The second tries to stave off the blow but fails and crashes to the floor.

One of the policemen, head constable Umesh Babu, who was seriously injured and referred to Delhi for treatment died this morning. Madhya Pradesh Chief Minister Shivraj Singh Chouhan has announced Rs 1 crore for the family of Mr Babu, news agency ANI reported. One of his family members will also be placed in a government job, it reported.

The other policeman has been admitted in a hospital in Gwalior.

The escaped man, 25-year-old Vishnu Rajawat, and his friend Mansingh were arrested from Bhind district on Sunday. But instead of keeping them in the lock-up they made them sit outside. But there were no one on guard and after a short interaction, Vishnu Rajawat attacked the two policemen and both made off. They were caught on Sunday night.

Mr Alvarez said they were arrested under Section 151 for disturbing the peace. "In order to escape, the accused he attacked the two constables... he used a spade lying there for some construction work," the officer added.

Caught three hours later, Vishnu Rajawat said, "They (the policemen) just made me sit inside the police station. So I just thought I would escape. That's why I attacked them".

The man claimed he was a farmer and had come to the area to meet a friend. He has been charged with attempt to murder and causing hurt.