"This was such a fun weekend (sic)," the actor said, retweeting Akash Barnabas's post. 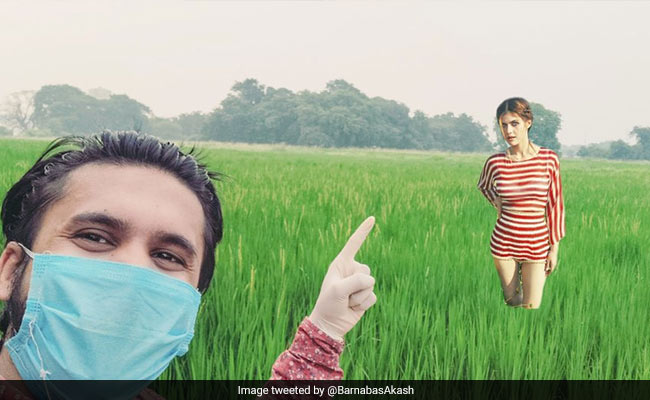 When a 24-year-old man from Uttar Pradesh's Allahabad posted a photoshopped picture of Alexandra Daddario on Twitter, little did he know that the Hollywood actress would respond.

But she did, leaving the man, who has less than 500 followers on Twitter, flabbergasted.

On Thursday, Akash Barnabas posted on Twitter a picture of himself with his face covered by a mask and had the "Baywatch" star in the background, standing in the middle of paddy fields.

This was such a fun weekend https://t.co/R7vpWA9CfH

"Haters will say this is photoshopped #couplechallenge (sic)," Akash Barnabas had captioned the picture.

The picture was evidently photoshopped.

The social media post attracted hundreds of retweets and thousands of "likes" besides setting off a chain of funny comments.

But the most important response came from the 34-year-old Los Angeles-based film star herself.

Akash Barnabas, a content creator, said he was amazed that the Hollywood actress responded to his tweet.

"I still can't believe that she replied. Literally vishwaas nahi ho raha (I cannot believe this). We Indians do not get replies from foreign artists," he told news agency PTI.

Akash Barnabas admitted that he is a fan of Ms Daddario and that was the reason why he put out that photoshopped photo of them together.