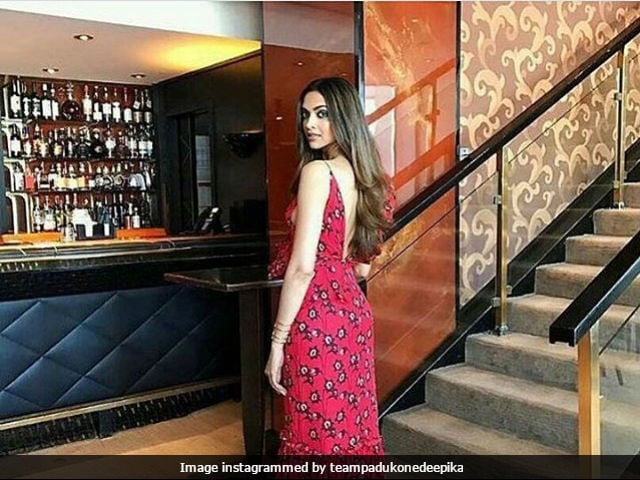 New Delhi: It is actress Deepika Padukone's big day at the Cannes Film Festival and her first look, presumably for press, is a red maxidress strewn with flowers by Johanna Ortiz. Pictures released by various social media accounts today showed the 31-year-old actress, wrapped in a fluffy white bathrobe, was pictured soaking in the sun in the Martinez Hotel and in hair and make-up, getting her eyes done in a shade that reflects the blue of the Mediterranean sea. Deepika Padukone has been at Cannes once before but this is the first year she will be representing cosmetics giant L'Oreal on what is arguably the world's most glamorous red carpet. Here are pictures of Deepika's first Cannes outfit and what she's been upto all morning:

Deepika herself reposted her stylist, who appears to think the actress looks a lot like the dancing girl emoji in her red dress (we'll be watching Twitter for reactions):

Beauty and the beach. #LifeAtCannes#DeepikaAtCannes#Cannes2017pic.twitter.com/mwfUtRNTuJ

Mesmerising is the word! #DeepikaAtCannes#LifeAtCannes#Cannes2017pic.twitter.com/3DFBRSumwy

. @deepikapadukone looking radiant on her first morning in Cannes, as she soaks up the sun by the French Riviera. #LifeAtCannespic.twitter.com/Ly2kQTK1f4

Vivid strokes of turquoise on eyes that could kill! Here's @deepikapadukone getting ready for her first red carpet appearance! #LifeAtCannespic.twitter.com/e2psj7gbeY

Deepika Padukone was photographed arriving at Nice Airport on Tuesday, chic in jeans and a summery mustard top by Chloe.

She left Mumbai on Sunday wearing a Alberta Ferretti maxidress topped with a jacket. She stopped over in London for a day.

In Cannes, Deepika Padukone posted a picture of the view from her hotel room. It's okay to be jealous:

Deepika Padukone wore a sari when she made her Cannes debut in 2010. This time, we're expecting slinky designer gowns. The actress' look will be curated by international stylist Elizabeth Saltzman. Deepika will be succeeded on the Cannes red carpet by fellow L'Oreal ambassadors Aishwarya Rai Bachchan and Sonam Kapoor.

The Cannes Film Festival will be held from May 17 to May 28.
Comments
deepika padukonecannes 2017cannes film festival