Anupam Kher, who has made no secret of his support for the government, said he has no objections if Naseeruddin Shah's statements allow him some space in the headlines. 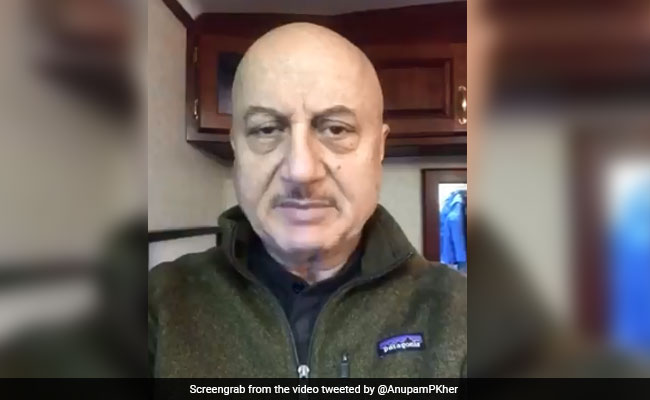 Actor Anupam Kher on Wednesday hit back at Naseeruddin Shah, suggesting that his "clown" jibe was made under the influence of intoxicants. He also accused the 69-year-old of criticising a number of celebrities and claimed that he considered himself "in very good company".

"If you could criticise Dilip Kumar, Amitabh Bachchan, Rajesh Khanna, Shah Rukh Khan or Virat Kohli, then I'm sure I'm in great company. And none of them has taken your statements seriously. Because we all know this is not you speaking. The substances you have been consuming for years have taken away your sense of judging what is right and what is not," Anupam Kher said in a video statement he tweeted Wednesday afternoon.

In a recent interview to The Wire, Naseeruddin Shah, while discussing the current situation in the country in the backdrop of the protests against the controversial citizenship law and the lists, spoke of the support the government was receiving from the film industry.

As an example, he cited Anupam Kher.

"Someone like Anupam Kher has been very vocal. I don't think he needs to be taken seriously. He is a clown. Any number of his contemporaries from NSD and FTII can testify to his sycophantic nature. It is in his blood. He can't help it," Mr Shah said.

Mr Kher, who has made no secret of his support for the government, said he has no objections if Mr Shah's statements allow him some space in the headlines. "I make a gift of that happiness to you," he said.

The 64-year-old signed off with a nationalistic statement: "You know what's in my blood? Hindustan".

Massive protests have been held over the past few weeks against the Citizenship Amendment Act - which the government says will help minorities from Muslim-dominated Bangladesh, Pakistan and Afghanistan to get citizenship if they fled to India because of religious persecution before 2015. Critics say they fear the law discriminates against Muslims and violates the secular principles of the constitution.

Critics also say the law, read along with the National Register of Citizens, the other controversial law meant to flush out illegal migrants, it would be used to target Muslims.

Speaking of the NRC that was expected to be rolled out across the country, Naseeruddin Shah said, "I don't have birth certificate. I cannot produce one. Does that mean we are all going to be excluded? I do not need any reassurances that Muslims don't need to worry. I am not worried".