Ready To Marry, But Only After 2019 Election, Says Tejashwi Yadav

"You know, one should have the time for a honeymoon too, but where's the time for that until the elections?" Tejashwi Yadav said. 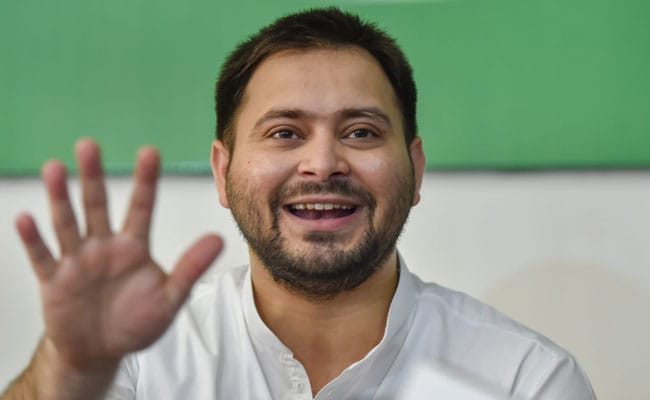 RJD leader Tejashwi Yadav, who has taken charge of the opposition offensive in Bihar as the stand-in for his jailed father Lalu Yadav, says marriage has to wait till the 2019 national election despite a barrage of proposals. The younger son of the three-time Chief Minister says if he does get married before that, he will be "too busy with the election" for a proper honeymoon.

The question came up when reporters asked Tejashwi, 29, to confirm that since his older brother Tej Pratap Yadav's wedding in May, proposals have flooded the Yadav home.

Offers even poured in at political gatherings, he said, sharing that one time, a priest started showing him matrimonials on stage.

"Yes, I'm getting a lot of proposals after the wedding but it will happen only after the Lok Sabha election next year," Tejashwi told reporters.

He also took a dig at Deputy Chief Minister Sushil Modi - Yadav junior had the post until last July when Chief Minister Nitish Kumar dumped the RJD and resurrected his alliance with the BJP - saying: "Now I'm saying this, then he will tweet - how can he marry, first he will have to go to jail. Sushil Modi Keeps predicting every day that Tejashwi will have to go to jail in IRCTC scam."

CBI alleges that Tejashwi Yadav, along with his mother Rabri Devi, are owners of prime land in Patna that was given in exchange for Lalu Yadav's role in manipulating a hotel contract to benefit one company when he was Union Railways Minister.

Tej Pratap Yadav's marriage to Aishwarya Roy, the daughter of an RJD leader, was an arranged match.

The brothers were last week summoned to a hospital in Ranchi by their father amid reports of growing strain. Tej Pratap reportedly wants a larger role in the party, though he is widely seen to be no match for his politically shrewd brother.