The painting, thought to have been created between 1735-40, depicts a traditional musical performance in northern India. 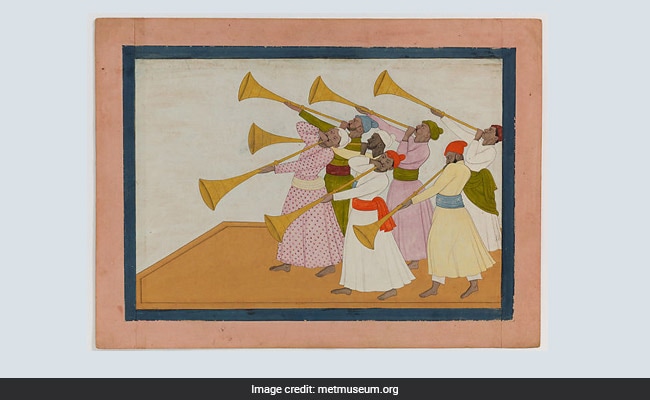 The painting depicts a traditional musical performance in northern India.

The prestigious British Museum in London has acquired a unique watercolour depicting a traditional musical performance in mid-18th century northern India after successfully raising the 440,000 pounds required to buy the rare painting.

''Trumpeters'' by Nainsukh of Guler (1710-1778), described by experts as a delicate miniature of a "rarely found calibre", had been blocked for export by the UK's Ministry of Digital, Culture, Media and Sport in 2018 in the hope of preventing its departure from Britain.

With the support of the UK's Art Fund, the National Heritage Memorial Fund (NHMF) and the Brooke Sewell Permanent Fund, the British Museum announced this week that the "masterpiece" has now joined its collection and has gone on free display in the museum's Sir Joseph Hotung Gallery of China and South Asia.

"Nainsukh, whose name translates as 'Delight of the Eyes'', is one of India's greatest courtly artists, and this outstanding painting showcases his gift for complex composition and precise observation," said Imma Ramos, curator at the British Museum.

"It was painted at the height of his career while he was working for the ruler of Jasrota, Raja Balwant Singh. Its jewel-like colour, intricate detail and poetic mood suggest it would have been seen up close and studied at leisure, enjoyed privately or among guests. We are delighted that it is now in a public collection for the first time, where it can be enjoyed by visitors for its beauty, and help the further study of South Asian art," Imma Ramos said.

The painting, thought to have been created between 1735-40, depicts a traditional musical performance in northern India.

It shows seven musicians playing Pahari horns with long pipes known as turhi, their cheeks puffed out with the effort. It is an unusual example of the artist's work, combining aspects of Nainsukh's early work with some of his later achievements.

It has been in a private collection since being purchased by the prominent British artist Winifred Nicholson (1893-1981) during a tour of India, Burma (Myanmar) and Ceylon (Sri Lanka) in 1919-20.
After Nicholson's death, it remained with her family and has now entered a public collection for the first time at the famous London museum.

The decision to defer the painting's export licence followed a recommendation by the Reviewing Committee on the Export of Works of Art and Objects of Cultural Interest, administered by the UK's Arts Council.

They made their recommendation on the grounds that the painting is of outstanding aesthetic importance and of significant use in the study of Indian history.

"This beautiful work has enormous historical value and will be admired by visitors from around the world as it goes on display at the British Museum," said UK arts minister Helen Whately.

"Export bars are put in place to save masterpieces like this one for the nation, and I'd like to say a massive thank you to everyone whose generous support made this acquisition possible," she said.
Nainsukh is the most famous and highly regarded artist of the Pahari or 'Hill'' style of painting, which developed in the Punjab hills of north-west India.

He is famous for his sensitively observed portrayals of people and places, conveyed through highly original and dynamic compositions.

Three other masterful paintings by Nainsukh of Guler are in the collection of the British Museum since they were donated in the 1940s.

Together these paintings can be seen and studied alongside the British Museum's extensive South Asia collections, allowing for further understanding of the full scope of the Pahari painting tradition.
Sir Peter Luff, Chair of the NHMF, noted: "This miniature watercolour is a stunning example of Pahari art".

"The Trustees of the National Heritage Memorial Fund agreed it was imperative to save 'The Trumpeters' for the nation and keep it on public display so that art enthusiasts and historians can enjoy and engage with the painting for generations to come," he said.

The NHMF was set up in 1980 to save the most outstanding aspects of British heritage, in memory of those who have given their lives for the UK.