According to official figures on fund allocation by the Himachal MPs from 2014-19, Ram Swaroop Sharma has allocated Rs 25.81 crore, while the unspent balance with the district authorities is just Rs 4 lakh, the lowest among his contemporaries. 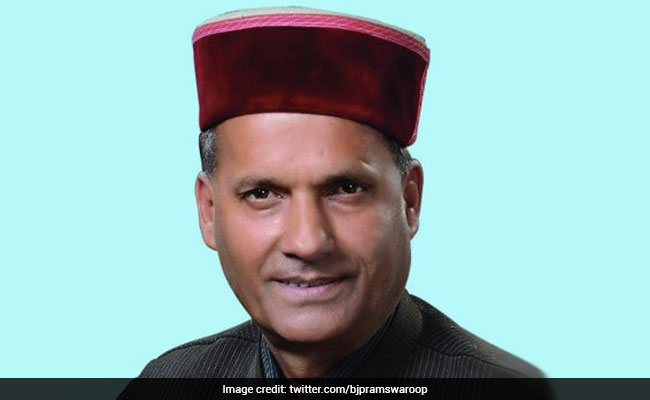 Ram Swaroop Sharma said his priority on allocating the funds was the local necessity.

BJP's first-time MP Ram Swaroop Sharma, who defeated six-time Congress Chief Minister Virbhadra Singh's wife Pratibha Singh from Mandi in 2014, has topped among the state's four lawmakers with fund utilisation over the allocated amount as high as 103.25 per cent under the Members of Parliament Local Area Development Scheme (MPLADS).

According to official figures on fund allocation by the Himachal MPs from 2014-19, Mr Sharma has allocated Rs 25.81 crore, while the unspent balance with the district authorities is just Rs 4 lakh, the lowest among his contemporaries.

"My priority on allocating the funds was the local necessity and for creating durable community assets with focus on developing model villages under the Saansad Adarsh Gram Yojana," Mr Sharma, 60, who is re-contesting for his second term, told IANS.

However, Mr Sharma's attendance in Parliament was 85 per cent but his participation in debates and raising questions was fairly poor. During his stint, he never moved a private member's bill.

Under MPLADS, each MP can suggest to the District Collector development work up to Rs 5 crore per annum.

BJP MP Anurag Thakur was the second among his contemporaries as far as utilization of funds was concerned. His discretionary fund utilisation for in Hamirpur, a BJP stronghold, was 93.05 per cent.

The three-time MP, who is again in the fray, allocated Rs 24.73 crore, while the unspent balance with the district authorities is Rs 4.96 crore.

BJP's Shanta Kumar, who was denied re-nomination due to his advanced age, was the third among the MPs and his allocated amount was 86.87 per cent.

Two-time Chief Minister Shanta Kumar, who is known in political circles for plain speaking, allocated Rs 24.21 crore in his Kangra constituency and the unspent balance with the government stood at Rs 5 crore, the highest among the MPs.

BJP MP Virender Kashyap's fund allocation was 82.11 per cent, the lowest among his state contemporaries. The unspent balance with the district authorities is Rs 4.98 crore, again the lowest among the lawmakers.

He allocated Rs 22.70 crore in his Shimla (reserved) constituency, once the stronghold of the Congress.

Mr Kashyap, 68, who has contested eight of the 10 Lok Sabha polls from Shimla (reserved) since 1980 and won only the last two polls, was declined the party ticket this time.

The BJP managed to win the Shimla (reserved) seat, which was considered a Congress bastion, for the first time in 2009.

As per the trend emerging in two decades, the electorate in Himachal Pradesh in the Lok Sabha polls has traditionally favoured the party at the helm in the state, except for 2014, when the opposition BJP won all the four seats.

In 2009, the BJP, which was then in power in the state, won three of the four Lok Sabha seats.

Himachal Pradesh will vote on May 19.